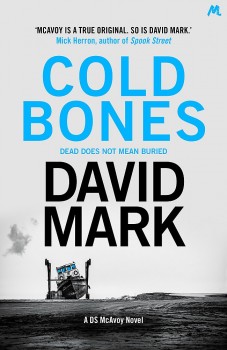 DS Aector McAvoy follows a report that an elderly woman has not been seen for days and finds her frozen in her bath, the start of a trail that reaches far into the past and uncovers a series of grisly murders.

Hull wouldn’t rate too highly on anyone’s list of world’s must-see cities – and David Mark’s dark and often brutal depiction of the crumbling fishing capital and port hardly makes it likely to rise in that rating.

In the coldest winter for years, Aector McAvoy, still a Detective Sergeant, but left temporarily in charge of the major crime unit while his boss DCS Trish Pharoah is sent on a secretive inquiry in Iceland, is told by a concerned stranger that an elderly women hasn’t been seen for days. He goes to check– and finds her body in the bath encased in ice: the heating off, windows left open and the whole house frozen. It could be accidental, but when McAvoy finds a series of cryptic messages, discovers she was tortured and her small flock of chickens slaughtered, it becomes murder. And there is also evidence that someone had watched her die.

As Aector starts to uncover the victim’s connections to a fishing trawler lost years before, Trish is more than 1,000 miles away investigating a mysterious death in a country traditionally linked to Hull by fishing. Now they are united by a dark secret concealed for half a century – a series of brutal killings across several countries. As the secrets of the dead return to prey on the living, Mark’s mastery of the atmospheric draws in adultery, uncertainty, mental instability, brutality, celebration of the past – and even a link to Iceland’s ancient sagas.

It is all held together by the character of McAvoy. The shambling Scottish giant, now with his own family, is a big hero with a huge heart, a man unafraid to face that dreadful dilemma few policemen meet in their careers – when does doing your duty interfere with your responsibilities as a human being? It has led him to turn down commendations and promotion, but it is a question McAvoy never shirks, allowing Mark’s distinctive style and skill at weaving light into the darkest fabric to produce a protagonist both real and compassionate.

The sensitive portrayals of the relationships between the principal characters both at work and home and his evocative descriptions of the life of the Hessle Road fishing community in its glory days with the wide-boy trawlermen – two months at sea in constant danger and a few days at home for riotous celebrations as ‘princes’ of the city – provide a perfect explanation and background for what follows.

Mark introduces his characters logically and his style allows the reader to follow the story almost as if watching a documentary. Even the ambitious and by-the-book area commander, pursuing promotion with rather more energy than he devotes to pursuing criminals and ready to acquiesce to local power brokers to the detriment of his police work, falls into place quite naturally.

Mark is one of the best of a new breed of noir writers, capable of allying a powerful story and massive brutality in a genuine, fast-paced thriller with a bit of heart.