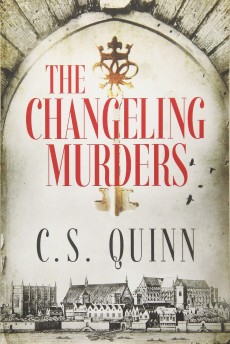 As London rebuilds after the Great Fire, thief-taker Charlie Tuesday’s former flame is kidnapped on the way to her own wedding and an actress, wearing her clothes, is found hanging from theatre scenery.

CS Quinn brings back Charlie Tuesday, the rising young thief-taker – a recoverer of stolen goods, part-private eye, part-bounty hunter, likeable, smart, with a string of underworld contacts and none too fussy when it comes to getting results – for his fourth, and perhaps most compelling, adventure.

The year is 1667. London is still reeling from the destruction of the Great Fire and rebuilding is slow. Charles II has been on the throne for seven years and enthusiasm for the monarch is rapidly ebbing as he squanders money on mistresses and favourites.

Hard knots of Cromwellian sympathisers remain – particularly among the tradesmen of the city and their apprentices. Superstition is rife among the lower classes and, fewer than ten years after Cromwell’s witchfinders scoured the land, belief in supernatural powers is beginning to take a serious hold on the public mind.

As a new city struggles to emerge from the ashes, the king and his court are hell-bent on debauched entertainment. Charles has reopened the capital’s theatres, but few are more than brothels. When an actress is found, hung from the scenery, bizarrely dressed in the clothes of Charlie’s former flame Maria who has gone missing on the way to her own wedding to a worthy, but boring, lawyer, Charlie is again plunged into a world of intrigue, witchcraft and mystery in which he is as much the hunted as hunter.

As Lent draws to a close, the city London explodes into shocking riot. Violent demonstrations by apprentices are nothing new, but this time there is a more sinister motive. As brothels and theatres are attacked, Charlie, reunited with his royalist spy sidekick Lily, must find clues to a mythical Lord and Lady, not only to save Maria, but also London itself.

After 350 years what little we know of characters and events of the time is very much open to interpretation. And Quinn, whose background is in historical research, exploits this to the full. Charlie is a very modern hero. Wily, determined and brave, he also has very human weaknesses. Some of his escapes would leave Bourne or Bond stranded and although there may be a few too many useful coincidences there are enough twists and turns to keep you baffled

Charlie may stretch credibility, but this fast-paced, clever, convoluted story is escapism at its best. It’s an often-humorous romp involving beggars, whores, gamblers and much of London’s lowlife – including the court!

Some readers may find it hard to follow with a wealth of secondary characters added to enforce a plot involving fairies and magic, madness, riots and with the motivations ascribed to each it can become hard work to keep it all straight. But stick with it. Despite the apparent meanderings and the problems of understanding the fairy myths and how they apply to the plot, it all comes together into an interesting – and quite spectacular – finish. This combination of quest/mystery/horror/love/sex story is a first-class tale.