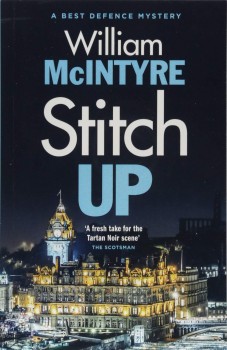 Lawyer Robbie Munro is asked by an old flame to investigate a death, while doing his best to protect his ex-copper father who’s accused of stitching up a child-killer.

This is the fourth outing for Edinburgh lawyer Robbie Munro, whose speciality is defending a variety of low-life from prosecution for petty criminal offences and trying to prise money out of the legal aid system. Here he gets a rare and welcome opportunity to sample the high life, thanks to ex-girlfriend Jill whose partner Hercule has been found dead at The Newberry, a top hotel.

An autopsy shows that Hercule died of a barbiturate overdose, and the police believe the death to be suicide, but Jill is unconvinced. Hercule was a rich executive for a biotech company who had made plenty of enemies as well as friends, and some in his extended family too might have resented his position. Robbie’s initial enquiries show nothing to suggest foul play, but Jill is insistent and willing to pay generously for his time, so Robbie not-to-reluctantly enjoys meals at the Newberry and a trip to Rome looking for more clues.

Meanwhile, there is a matter closer to home calling for attention. Robbie’s father Alex, a retired policeman, is called in by the Counter-Corruption Unit. Alex was involved in the prosecution of Ricky Hertz for the killing of three young girls. Ricky has served 17 years of a life sentence but has been released on bail after the submission of new evidence – discovery that a cigarette butt supposedly confirming Hertz’s presence at a crime scene had Alex’s DNA upon it – suggesting that the conviction was a stitch-up.

Robbie has difficulty convincing Alex that if the court finds the stub was planted, not only would Hertz be released and paid compensation, but Alex would also probably end up serving a long term himself. Alex’s old partner Jock is now suffering from dementia, so Robbie urges Alex to point the finger, but Alex is reluctant. Robbie has to come up with some creative moves to delay Alex’s appearance in court while he finds reasons for the appeal court to put Hertz back inside.

Robbie’s wife Joanna is away for a few weeks so Robbie spends more time with their daughter Tina than either of them are used to, although Alex, Robbie’s footballer brother Malky and office manager Grace-Mary are as usual roped in to share the burden. Tina has very definite ideas for a six-year-old and is particularly alert to any signs of intimacy between Robbie and the women he interacts with, passing on salient details to Joanna at the earliest opportunity.

Robbie performs in his accustomed manner, rubbing shoulders with a large cast of incidental players while groping towards solutions which will protect clients and boost his income. He might not be the sharpest knife in the box (a major clue in one of the tasks at hand is all but overlooked until the last few pages) but his activities and the scepticism of his friends and family are always amusing.