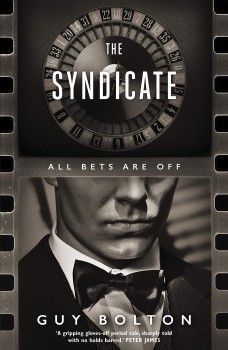 1947. A notorious New York mobster is murdered in Hollywood. Jonathan Craine, a retired Los Angeles policeman, is blackmailed into taking on the task of finding his killer.

Bugsy Siegel was a real person. He was originally a member of the New York crime family who was sent by them to California in the late 1930s to develop gambling rackets with the Los Angeles crime family. A few years later he moved to Las Vegas and was responsible, with a wealthy partner, for building the Flamingo hotel. There was no law against gambling (or prostitution) in Nevada and, after a shaky start, the Flamingo prospered. However, Siegel had many enemies and on June 20 1947 he was shot and killed – a crime for which nobody was ever arrested and which remains unsolved to this day.

The novel hinges on a fictional request from a historical character, Meyer Lansky, another mob boss. He blackmails Jonathan Craine, a farmer living in California, into investigating the case and locating the murderer. Craine is chosen because, prior to his retirement, he had been a policeman in Hollywood, though of dubious character. Although not actually a criminal himself, he worked mainly on behalf of the big movie studios as a fixer, ensuring that, no matter what their film stars got up to, no breath of scandal ever touched the studios.

Craine is perfectly content to live the rest of his days as a simple farmer and is very reluctant to become involved, but when his family is threatened he has to agree. He is rather an unsympathetic character, perhaps less so than in Bolton's previous Hollywood novel, Pictures, and not someone it’s easy to take to in spite of the fact that everything he does is for the sake of his son whose life is in danger. He is ashamed of the fact that when others were enlisting at the outbreak of war, he did not do so, preferring to remain a policeman.

This is a somewhat unusual book in that it contains a number of historical characters and deals with historical events. Of course, in a book set in Hollywood there are frequent reference to movie stars – Henry Fonda, Robert Mitchum, Frank Sinatra, Ava Gardner and others. It is perhaps a failure of the book, however, that they are merely names, have only walk-on parts and contribute little to the desired atmosphere. The main theme is simple enough – to establish who killed Siegel and why. Even though his murder was almost certainly mob-related, for the purposes of the novel it’s necessary to accept the assurance of Meyer Lansky that this was not the case.

In relation to the arrangements for the killing there is a sentence in the book which states that 'the mechanics of what had been negotiated were confusing' – an opinion with which it is easy to agree. There are so many theories advanced – by both the fictional and the historical characters – that it is almost impossible to come to any rational conclusion.

However, it is quite easy to put them aside and read the novel simply as one of suspense – an area in which it certainly succeeds. Part of this success is due to the believable way in which Craine conducts his investigation. He has a very limited amount of time in which to come up with his answer and makes good use of people who can help him – a woman reporter and a rather unusual mob guardian – to take him closer and closer to the truth. Whilst his inquiries are taking place there is more than enough happening to keep the reader engrossed, the combination of the fictional and the historical being very well handled. There is always the feeling that there will be a surprise ending and when it arrives it is not only surprising but also profoundly satisfying.