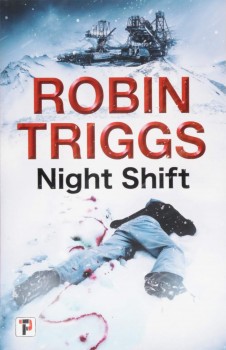 The new head of security at a mining base in Antarctica is told there’ll be nothing for him to do, but that prediction is soon proved wrong in spectacular fashion.

Anders Nordvelt is the new head of security at Australis, one of the world’s most remote mining bases. Here, a small group are charged with keeping production levels high through the long Antarctic winter. It’s made plain very early on to Anders that his presence is entirely unwanted. The base commander, the overbearing Anton de Villiers, condescendingly tells him that there’s no job for him, and even though he’s technically one of the three executive officers on the base, there will be nothing for him to do and nothing to investigate.

De Villiers’ prediction naturally doesn’t come true – otherwise it would have been a very boring book! Shortly after the long Antarctic night closes in, disaster strikes when an avalanche hits the communications centre, cutting the base from the outside world. Unusual seismic activity is blamed, even though the geological reports indicated no likely tendency towards that sort of problem. Anders has a suspicious nature, and he’s determined to do his job properly, despite de Villiers’ unsubtle attempts to get him to keep his nose out of things. He feels sabotage can’t be ruled out, but Australis’ crew aren’t ready to listen to an unwelcome outsider.

Robin Triggs does a good job setting up a climate of suspicion in Night Shift, and the book has some genuinely chilling moments, but even a small crew presents a relatively large cast of characters and at times it’s difficult to get a handle on who’s who. There are also times when there’s a disjunct between show and tell in the book. We’re told that de Villiers is a charismatic leader, but we’re shown a boorish bully who leads by currying favour with those under his command and belittling anyone who’s got on the wrong side of him. Frankly, when he comes to a chilly end, it was more a case of identifying who wouldn’t have wanted him dead, rather than the other way around!

There are some tantalisingly snippets of world-building in the book, and it came as something of a surprise to realise that this wasn’t just a bog-standard whodunit in an unusual setting. There are hints that the morning operation is there to provide vital fuel for a world that has been stretched to breaking point. Australis is owned and run by the mysterious Company, who are opposed by a much-reduced United Nations. But hints are all we get, and that’s not much to go on. I could have done with more background here, but I can also understand why the author kept the focus on the mystery at the heart of the bases, and there’s a good argument that less may have been more in this case.

Night Shift is certainly more mystery than science fiction and reminded me of some of the golden age classic whodunnits where you had to decide whether it really was Colonel Mustard in the library with a poker, or alternatively the stony-faced butler or the put-upon servant. The base’s medic is distraught at the death of de Villiers, but in an unfortunate accident that certainly doesn’t endear the beleaguered Anders to the rest of the crew, she’s knocked unconscious and consigned to the medical bay. The miners make it clear they don’t trust him, and only the cook and one of the female crew-members seem to have much time for him. Max, the woman they call the janitor as she clears up everyone’s mess and makes sure the equipment in the base carries on working, makes an effort to get to know Anders, but that’s about all, and none of the characters really stood out for me.

I also developed a strong suspicion about who was at the root of the problems in Australis by midway through the book, the legacy of teenage years spent reading Agatha Christie finally paying off! Despite that, I enjoyed watching the plot develop, and the book was sufficiently gripping to keep me turning the pages. The outsider viewpoint plays out well, as there’s a natural tendency to sympathise with the narrator and Anders himself comes over pretty well. He’s a bag of uncertainties, made worse by de Villiers’ outright unpleasantness, but he’s also determined to do his job, and I liked that streak of bloody-minded determination.

There were elements in the book that reminded me of the survival against all the odds scenario so excellently depicted by Andy Weir in The Martian. There’s less science fiction in Night Shift, despite the dystopian near-future setting, but plenty of tension and interest. I read the book in two sittings and was keen to keep turning the pages to see if my suspicions were correct. Reading on the first really cold day of winter helped with the atmosphere, too!