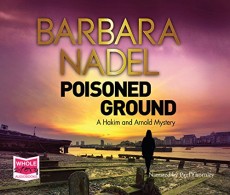 London PI Lee Arnold is still struggling to make ends meet. He’s been called in to track down a missing fraudster and Mumtaz Hakim has gone undercover at a psychiatric unit in an attempt to clear a former employee accused of terrorist activity.

Ex-soldier and former copper Lee Arnold is now a PI in London’s East End community. He fights a constant battle to keep the agency’s head above water financially, even with the Bangladeshi contacts his assistant Mumtaz Hakim brings to the party.

In the third book in the series, Mumtaz has been engaged by Salwa el Shamy, whose husband is in Belmarsh Prison. Home-made bomb-making equipment was found in his locker at work, but his wife refuses to believe he’s guilty and wants Mumtaz to investigate Ilford Psychiatric Hospital, where he worked. To enable Mumtaz to get close to the staff, she goes undercover as a patient advocate, and soon begins to suspect that there’s a lot going on below the surface, with possible patient abuse that led to the recent suicide of a young woman.

Meanwhile, Lee has been engaged to look for a missing man, who absconded after fraudulently selling his ex-wife’s house for a large amount and then disappearing. Oddly, she seems more concerned about discovering that he’s all right rather than recovering the money he ripped off.

As ever, the pair have plenty going on in their private lives. Mumtaz is being hounded by the Sheikh family for money to pay off her dead husband’s debts to them, and is having to downsize her house to a flat to generate some cash to get them off her back. She’s kept her problems from her stepdaughter, but despite that, Shazia’s suspicions are aroused when she sees the unpleasant Naz Sheikh hanging around her mother.

Lee’s also having problems with a jealous girlfriend who resents his friendship with veteran copper and sometime squeeze DI Vi Collins, whose 40-a-day habit is well-conveyed by narrator Paul Thornley, who constantly proves how well he’s able to handle everyone that Nadel’s writing throws at him. Lee’s also got Vi’s sidekick DI Tony Bracci under his feet at home as a temporary lodger.

Barbara Nadel’s great strength lies in her ability to evoke perfectly a large and diverse supporting cast, while fleshing each one out enough for them to be distinctive. Her themes are topical and don’t shy away from showing the conflicts that arise in the cultural melting pot of the East End. The various threads of a complex, sprawling plot are drawn together well enough that none of it feels like padding, and there’s plenty of intrigue and tension, as the strands come together and the stakes are raised for both Lee and Mumtaz.

My one criticism was a protracted reveal at the end where one of the characters is manoeuvred into position to spend an inordinate length of time explaining the plot. Deathbed confessions are a cliché, although I will admit to not having come across one for a while, but that certainly isn’t a plea for them to make a return! I prefer to discover things organically, rather than through an obviously staged conversation.

Lee Arnold and Mumtaz Hakim are a great duo, and the friends and relations vibe the books have provide plenty of scope for interest. Both Lee and Mumtaz are interesting and likeable, and that’s not a combination found often enough in crime fiction!