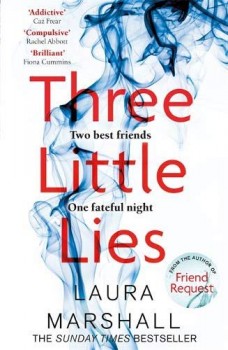 Her best friend has gone missing, but Ellen is the only person taking her disappearance seriously.

2017. Ellen lives in London with her best friend, Sasha. They lead their own lives, but Sasha would never stay out all night without warning Ellen. When Sasha doesn’t come home, Ellen is not particularly worried, but when she still hasn’t made an appearance the next day, concern kicks in. Remembering the threatening letters from Daniel does nothing to appease her. And her fear grows when Sasha’s boyfriend turns up, throwing accusations and his weight around.
2007. Olivia must sit in court and watch her son Daniel, while he is accused of raping his girlfriend, Karina. She must listen to Sasha, the girl she took under her wing, and Karina and Ellen, who she’d opened her house to, lying to the judge and jury.
2005. Ellen, Karina and Sasha meet for the first time when Sasha moves into the street with her godparents and their children. They are angst-filled teenagers, their insecurities driving them together and apart, twisting them to the moment where the lies begin.
2017. Three little lies, buried just under the skin for the last ten years, are just about to worm their way out with dangerous consequences.
Poisoned friendships, secrets and lies are the stuff of good psychological thrillers. Dysfunctional families and angsty kids are the backbone of secrets and lies, so I thought I was onto a winner here. And the opening chapter held promise; a mother watching her son in court being tried for a rape she knows he wouldn’t have committed. But it only took a few paragraphs into the next chapter before I had that sinking feeling; here we go again, another neurotic, needy, protagonist whose emotional age belies her real one.
Within a few more chapters, I wasn’t surprised Ellen’s friend, Sasha, had gone missing. I would have too with a friend that clingy and obsessive. Worse, I couldn’t find the emotional investment in the characters to care – between the snippets of information and misinformation about Sasha and Karina, they and Ellen came across as teenagers in adult skins. And between Ellen running around like a headless self-professed detective plus the constant reminder of ‘Sasha’s gone missing,’ I stopped wondering if Sasha was in danger. I was up there with the police and their disinterest in the case.
The portrayal of Ellen, Sasha and Karina as teenagers is more convincing. I like their ever-changing alliances, their bitchiness, their desperate need to feel part of something. It would have been better if the current-day story had taken place just a couple of years later. At least the ‘older’ characters’ introspections and behaviour would have been believable.
Over and above the time-leaps, the chapters vary in point of view. They are primarily Olivia and Ellen, but there are chapters devoted to Karina towards the end. These changes are not difficult to keep up with, but there is a generous number of characters, some of whom do nothing for the plot other than offering a few extremely obvious red herrings.
There is a twist, but it is made possible by a lack of focus on a certain person rather than by an excellent set-up. I am afraid I had worked it out early on, along with Sasha’s true circumstances as a teenager.
Three Little Lies is a fast, easy read, but it lacks thrills and a sense of danger.