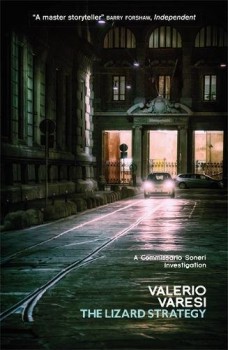 An old man with dementia goes missing, a telephone ringtone can be heard from a lonely river valley and the council is in chaos. Commissario Soneri has to make sense of all these events.

On a winter’s day when snow is beginning to fall Commissario Soneri’s friend Angela asks him to drop in to see her friend who keeps hearing a telephone ringtone coming from a lonely area near the Parma river in the vicinity of her house. Rather sceptically Soneri agrees to go to see her.

On his return he learns that an elderly man with dementia has gone missing from a local hospital. All this is going on at a time when the Parma town council is in chaos. A number of councillors have been arrested and subsequently the mayor himself goes missing. Soneri sets out to make sense of it all and constantly struggles with his own despair at the modern world.

The theme that runs through the book is this despair at the context in which everything seems to be going wrong. In particular, Soneri despairs of local politics, of business and of bankers. He himself has risen to his current role from a background of poverty, and so feels great resentment when he sees criminals and other wrong-doers getting into positions of power from where they can manipulate the local population, and in doing so make themselves richer or more powerful.

Soneri makes friends with a decent man, Valmarini, who is an art forger. Valmarini makes forged old masters for the corrupt rich in Parma, in particular for the leader of the opposition party on the council who sells the forged masters on to gullible friends. Valmarini, who is innocent of any crime, has interesting thoughts about what happens to his paintings, and he and Soneri spend thoughtful times together.

Meanwhile, the mayor has disappeared, the elderly man with dementia has been found dead and the mystery of the telephone ringtones is becoming clearer. Soneri struggles to put it all together and to make sense of what is going on.

Looking back on the book this all seems clearer than when reading it for the first time. One of the things that makes it difficult to understand at times is the number of characters involved in the story. Some of them appear only briefly and so it is not always easy to remember who they are when they occur again some time after they are first mentioned.

The plot is complex but believable and the writing is very clear, although it gets a bit bogged down towards the end of the book trying to tie together all the loose ends. The main characters are drawn in some depth. For example, Soneri often complains about the negative effects of modern technology, and yet is also aware that his feelings are not unrelated to his own lack of expertise with it and his own feelings of inadequacy.

The book – an enjoyable, well-written and thoughtful story – is full of little homilies. One such which relates to Soneri is: “Flexibility and adaptability are the best antidotes against being viewed as decrepit.”