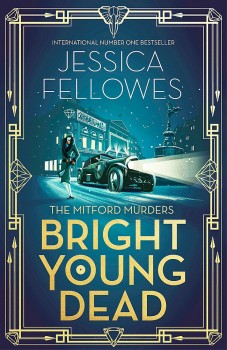 A treasure hunt at the 18th birthday party of Pamela Mitford ends in tragedy when a guest falls to his death from a church tower. The police identify a maid as the killer, but Louisa Cannon, chaperone to the Mitford girls, sets out to clear her.

It is absolutely outrageous so much talent should run in one family! Jessica Fellowes, a journalist, magazine contributor and commentator, is also author of the companion books to her uncle’s fabulously popular Downton Abbey TV series and the Gosford Park film.

Now she’s heading for a TV series of her own – from the makers of the popular if more than a touch sensationally inaccurate The Crown – based on the lives of the Mitford girls, the six daughters of the Honourable David Freeman-Mitford, later 2nd Baron Redesdale.

Jessica’s debut with The Mitford Murders featured the wilful, acerbic and bright 16-year-old Nancy, eldest of the sisters, already showing signs of the inquisitive, unconventional and witty author she would later become. Nancy was improbably teamed with Louisa Cannon, the smart and ambitious daughter of a poverty-stricken south London washerwoman, trying to escape the attentions of her oppressive and dangerous criminal uncle.

A series of chances led Louisa to a position in the Mitford household at Asthall Manor in the Oxfordshire countryside. Progressively as nurserymaid, chaperone and confidante to the sisters, she anchors the series. At the same time she develops her own interests and character as Downton Abbey meets Agatha Christie in an inventive, glittering, clever, and at times witty golden age homage – a lively, well-written and entertaining whodunit of the old-fashioned school.

In Bright Young Dead, Nancy again features, as does Guy Sullivan, the short-sighted and attractive former railway policeman now struggling to find acceptance in the Met. But much of the emphasis is on Pamela Mitford, now a gauche 18 and about to be launched on society.

At her birthday party, one of the guests, the cruel, but charismatic Adrian Curtis is pushed to his death from the church tower near the Mitford home during a treasure hunt. Local police are quick to accuse a maid, found with stolen jewellery, of the death. But Louisa, who knows the girl is trying to escape her criminal background, is not satisfied with their glib conclusion, based largely on class prejudice, and sets out to prove her innocence, helped by the two Mitford girls and Guy. Their search leads them into conflict with the Forty Thieves, an all-women South London gang and their male counterparts, the vicious Elephants.

This accomplished, frothy, clever, historically sound and believable story with its timely reminders of the inequalities of 1920s life is huge fun to read – and bodes well for Fellowes equalling, or even surpassing, her uncle as premier chronicler of the era.