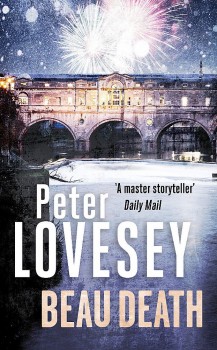 The demolition of a terraced cottage lands Detective Superintendent Peter Diamond with the coldest of cold cases when a skeleton in 18th century clothes is exposed.

The 17th of Peter Lovesey’s entertaining series featuring the frequently querulous Detective Superintendent Peter Diamond, head of Bath CID, proves the Dean of procedural mysteries has lost none of his skill in characterisation, humour or plotting.

The prolific and effortlessly elegant Lovesey, a former chairman of the Crime Writers’ Association, is at his absolute best in what is one of his cleverest stories – intriguing, solid, and well-written.

Despite his skills, I’ve never been a great fan of Diamond, preferring Lovesey’s superb Victorian detective Sergeant Cribb, but this labyrinthine maze of past and present, conmen and conundrums, mystery and murder has changed my mind.

I have for long been surprised that none of the Diamond stories have found their way onto the small screen. The quixotic protagonist, backed by Bath’s scenic elegance, seem tailor-made to fill the gap left by Oxford’s beloved Inspector Morse. In his latest outing Diamond is faced with the coldest of cold cases. As a wrecking ball crashes through the roof of a terraced cottage it exposes a skeleton in 18th century clothes in a sealed attic.

The particular style of clothing sparks speculation that these may be the remains of the ‘King of Bath’, Beau Nash, the 18th century Welsh fashion and social arbiter who almost single-handedly elevated the city to the epitome of social elegance, but who died penniless with his body said to have ended in a pauper’s grave.

As Diamond’s team of detectives grapples with varying degrees of willingness in this historical mystery, the investigation is shaken by two widely differing discoveries. Firstly, beneath his faded, blood-stained and moth-eaten finery, the skeleton is found to be wearing horribly modern Y-fronts! And there’s an even more modern case when a local entrepreneur is shot dead during a fireworks display on the Royal Crescent lawn. But the spectre of Beau Nash refuses to be ignored and as astonishing new facts emerge about the original case, Bath’s history is rewritten as mysteries ancient and modern fuse together.

This superb, convincing and inventive mystery, stuffed with clues, dead ends and red herrings, is as much a crash course in 18th-century dress and manners as it is a potted history of Bath or a procedural, but Lovesey’s light touch ensures it never enters textbook boredom.

Diamond is by now a well-established figure of an old-style policeman, sticking to the established ways and methods, grouchy, quick to bark orders, yet also intelligent enough to accept ideas and fiercely defensive of both his team and territory.

Scenes with his detectives carry enough procedural jargon to appear authentic within the limitations of the plot, but it is Lovesey’s treatment of Bath’s pompous glitterati and professional classes which make this book such a joy to read.