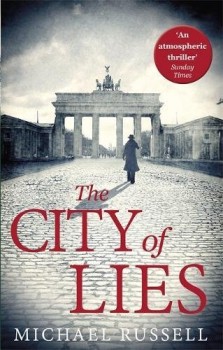 The City of Lies

Garda Special Branch Inspector Stefan Gillespie, investigating the IRA murder of a Garda, a pitched battle between racecourse gangs and the partly burnt bodies of a family of five, is called off for a sensitive mission to Berlin, but soon discovers all the incidents are connected and that his own life is in danger.

Dublin 1940. Across the Irish Sea the aerial Battle of Britain rages. In an uncomfortably neutral Ireland, the country’s unique complexity of divided loyalties and enmities are explored with clarity and intelligence.

German and British spies eye each other across Dublin bars, the police and military intelligence are at each other’s throats, and the still-dangerous IRA hopes for a German invasion to topple de Valera’s government.

In this febrile atmosphere an IRA ambush leaves a Garda dead on the streets of Dublin, a pitched battle between warring racecourse gangs erupts at The Curragh, and the partly burnt bodies of a wealthy family of five are found in their burned-out home.

Gillespie, a methodical, competent, balanced and human detective, is sent by the Special Branch to investigate, and finds himself caught in a web of Irish, British and German intelligence, all watching each other, all plagued by rogue operators they can’t quite control, as connections between the crimes become apparent – and the certainty grows that Hitler is about to invade England.

A multi-stranded plot, neatly pulled together at the end, covers much of wartime Europe and the provisional sense of stability and democracy in post-Independence Ireland has never been better captured. So too is the human tragedy of the war, in particular some of the less well-known Nazi outrages which began as early as the invasion of Poland.

Gillespie is taken off his other cases and sent to Berlin on a sensitive mission which involves him with the Nazi ‘legal system’ as he attempts to establish the innocence of an Irishwoman accused of murder. And he puts his life on the line as the principle players all seek the information he now possesses.

English-born Michael Russell, like so many children of Anglo-Irish families, learned the modern history of his native country at his grandmother’s knee. Tales of the Tans, Thompson sub-machine guns, ambush, murder, the bitter civil war of the 1920s and the depressingly bleak years of de Valera’s government have sparked a remarkable series of historical crime novels covering the period from the founding of the Republic up to the early years of World War Two.

This fourth in the saga of Protestant Garda Special Branch Inspector Stefan Gillespie is probably Russell’s best so far. It’s a multi-layered, intricately plotted story of the complexity of the early war years, a compelling mixture of fact and fiction featuring real protagonists and victims, that brilliantly portrays a world in which truth – always the first casualty of war – has little currency when balanced against political expediency.

This part thriller, part historical novel is superbly atmospheric, complex and compelling. Vivid and convincing, Russell’s style is easy, fluent, clear, calm and never over-heated and a realistic set of fictional characters, interwoven cleverly with real characters and events of the era make this it a page turner of literary quality.

Most telling of all, he captures the essential truth of war – that lies and propaganda are more important than truth. Characters in all three national capitals talk about the ‘real’ truth, while meaning no one needs or wants to know, a situation which will claim innocent lives and a price both accepted and exploited by those in power.

Read The City of Lies – and ignore the now apparently compulsory historical inaccuracies. Roland Freisler was not appointed president of the Volksgerichtshof, the Nazi People’s Court, until 1942 – and the RAF Mosquitos which buzz Gillespie’s ship to Lisbon in September 1940 did not enter service until November 1941! Also there would be no way of telling they were flown by Poles!

But ignore the whingeing of an old pedant! This is a quite brilliant read and a solidly fact-based explanation of Ireland’s delicate balancing act as a strategically key neutral on the close fringes of the war in Europe, plus a clever and utterly believable crime story.