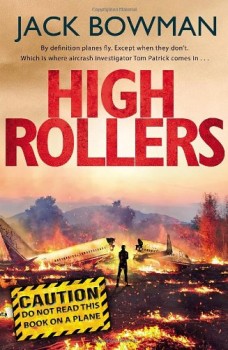 National Transportation Safety Board investigator Tom Patrick is first on the scene when the engine of an aircraft on the ground at Los Angeles airport tears itself apart killing three men and injuring six more. And it’s not the only 737 that has problems as the death toll starts to rise.

Tom Patrick, investigator with the National Transportation Board, is a man with the worst case of foot in mouth syndrome I think I’ve ever encountered. He’s already in disgrace for telling the hysterical widow of a rich New York stockbroker – in the middle of a press conference – that it was her husband’s own fault for ending up with a broken neck as he hadn’t been wearing his safety belt.

Naturally that didn’t go down well, especially as the results of the investigation hadn’t yet been made known, but Tom hasn’t learnt anything from that. He combines the subtlety of a charging rhino with the charm of a scabrous rat, never missing any opportunity to say the wrong thing at the wrong time. He’s also a gambler, a man used to playing for high stakes, who doesn’t take much persuading to get involved with some money-laundering. All in all, he’s entirely dislikeable, yet one of the most entertaining protagonists I’ve come across in a month of Sundays. Watching him get into trouble is very definitely train wreck reading, or in this case, plane wreck.

Tom is certain that something connects two wholly different accidents. Firstly, there was the carnage caused when the engine of a 737 called The Pride of Maine comes apart in spectacular fashion on the ground in a hanger at Los Angeles airport, killing three men and injuring six more; and secondly, the loss of everyone on board another 737 when it crashed above an ostrich farm in South Africa.

He’s reluctant to get involved, but Halo Jackson, one of the maintenance crew who worked on The Pride of Maine, refuses to believe the finding of probable cause that implicated one of his dead friends in the disaster in the hanger, thus denying the man’s widow any entitlement to pension and other benefits. Halo is everything that Tom isn’t. Basically, he’s a nice guy. He’s also doggedly persistent, and succeeds in piquing Tom’s interest in the case, and then once that’s happened, Tom continues to dig, even when he’s sidelined from the investigation.

High Rollers is as entertaining and enthralling as its main character is flawed, but whilst the flawed protagonist is deservedly something of a cliché in crime fiction and thrillers, in Tom’s case, the flaws come as naturally to him as breathing. There’s no two ways about it. He’s a dick, but he’s also an exceptionally good investigator, and his creator is an exceptionally good writer.

It’s hard to say which scenes carry the most credibility: the ones at the poker tables or the shockingly matter-of-fact descriptions of the horrendous aftermath of a plane crash. Both have the same absolute ring of authenticity. Bowman writes fluidly, his dialogue is crisp, he has a lovely turn of phrase and the action scenes drag you along by the scruff of the neck, barely allowing you to breathe. It’s hard to find out anything about the author, but as far as I can tell, this is his debut, and it’s one that will be hard to beat on either side of the Atlantic. I very seriously hope Tom Patrick is going to be a recurring character. I can’t wait to see who he’s going to insult and antagonise next.