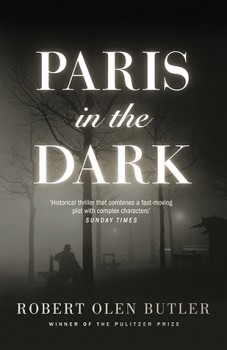 Paris in the Dark

An American journalist is in Paris when a bomb goes off and sets out to find the culprit.

Kit Cobb, an American newspaper reporter and an undercover agent for the US government, is in Paris to write a story about American ambulance drivers. When a bomb goes off in one of the poorer areas of Paris finding the culprit becomes his main preoccupation.

Two days later James Polk Trask, head of the secret service within the American Embassy, gets in touch with Cobb and outlines his theory about the identity of the bomber. The Deuxième Bureau, he says, watches ports, railway stations and border entries for suspicious characters and does it well. However, they are not equipped to cope with the multitude of refugees descending on Paris, among whom could well be Germans bent on terrorising the civilian population. He goes on to say that the United States would, in spite of the weak Woodrow Wilson, in all probability be drawn into the conflict. In the meantime the French have to hang on and America, even though a neutral nation, has to help in whatever way it can.

It is obvious to Cobb that he has all the qualities Trask is seeking to track down the bomber and that he is being asked to use them. He agrees on two conditions, both of which become a central part of the novel. The first is that must be allowed to carry on with his reporting duties and the second that he be given free rein to investigate in his own way. Trask refers him to an important Frenchman, Henri Fortier, who provides him with the name of a contact and the chase begins.

There is no question about the author's ability to construct a tale of suspense and the account of Cobb's adventures in the German quarter of Paris is gripping. His intelligence and, above all, his intuition – of which he always makes great use – soon have him convinced that he has identified his man. However, he learns that things are not always as they seem.

There is a romantic interest in the novel and one that is very convincing. That it is so is largely due to the fact that it arises directly from the story he had come to Paris to write – the contribution being made to the war effort by American ambulance drivers. Louise Pickering, an enigmatic nurse who works with them, catches his eye and it is not long before he is seriously in love with her and, as it turns out, she with him.

Equally clever is the way in which the interviews he conducts, with one of the drivers in particular, gradually lead him to think that the conventional wisdom of the Parisians – that the Germans are monsters who would think nothing of slaughtering the civilian population – may be wrong in this case. An odd remark sets him thinking about other possibilities and he soon finds himself exploring them.

The suspense that gradually builds up is in no way betrayed by the ending. It is then that Cobb's ability to think outside the box comes into its own. The author provides one of two clues, essentially a repetition of the same apparently minor everyday occurrence, which indicate where the denouement might take place. When it does Cobb is alone, with a theory that he almost hopes is wrong because if it is right he could be in mortal danger.

It is noticeable that even minor characters in this novel are convincing and the main ones totally so. The reason for this seems to be Butler's facility with language. It is varied and, whether concerned with an everyday scene, a dramatic incident or simply a conversation, he seems invariably to hit the right note. It is easy to see why one of his books won a Pulitzer prize. Paris in the Dark is a worthy successor.