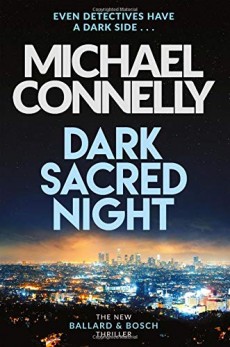 Detectives Renée Ballard and Harry Bosch work together to reopen a cold case in the hope of finally bringing the killer of a teenage runaway to justice.

Detective Renée Ballard works the very unglamorous night shift in Hollywood Division, but it suits her pretty well, leaving her with free time during the day to spend with her dog and go surfing on the beach. She’s happy to keep her head down and get on with her job, which often involves the unpleasant details of death, in this case the body of an old woman who seems to have been chewed by her cat.

When Renée finally gets back to her office at about 3am, she’s surprised to find a stranger in the station, rifling through a filing cabinet. The intruder isn’t one of her colleagues, but she certainly knows him by reputation – the former LAPD Detective Harry Bosch, who claims he’s just looking through his old drawers while waiting to see someone.

Naturally, Renée isn’t impressed and as soon as he’s gone, she looks to see what he was in search of. She discovers that Bosch is hunting the killer of a teenage runaway called Daisy Clayton, who sold herself on the streets to fund her drug addiction before ending up violently murdered, her body scrubbed clean with bleach to remove any traces of her attacker.

Dark Sacred Night alternates been the perspectives of Harry and Renée, the point of view in each section clearly marked. I’m not normally much of a fan of dual narration and can find it difficult hopping from head to head, preferring to settle with one person for most of the book, but Michael Connelly handles the shifts adroitly, using the changes to ramp up the tension, employing the frequent use of internal cliff-hangers to exploit each mini-hiatus before picking up the story of each protagonist where they left off.

Harry’s personal life continues to be complicated. His daughter is now away at college and he sees her a lot less than he would like, and that distance is compounded by her deep disapproval of Harry having taken in Daisy Clayton’s mother, Elizabeth, who’s also trying to kick a drug habit. She’s been through a tough rehab course, but even so, there’s always a chance hat she’ll revert to the same self-destructive ways that led to her daughter’s death. The trouble is that at heart, Harry is a decent man and he genuinely wants to help Elizabeth, even if it means jeopardising his relationship with Maddy.

Renée decides to throw her lot in with Harry and joins the search for Daisy’s killers. The two characters work well together, forming a partnership of two skilled people, who successfully put aside their lone wolf instincts and work together to a common goal. Connelly’s skill at weaving disparate strands together to form a coherent whole is in evidence again. There’s plenty of tension, helped by the narrative shifts, and Connelly proves yet again that he’s still at the top of the tree when it comes to writing police thrillers.