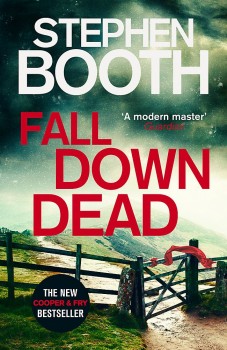 When a woman falls to her death in the fog on the bleak moorland of Kinder Scout, DI Ben Cooper is faced with the age-old question – did she fall or was she pushed?

Stephen Booth’s long-running Peak District series featuring local-born DI Ben Cooper is back, this time inextricably entwined with the bleak landscape of Kinder Scout, a wide expanse of moorland where the open access to the countryside movement famously started. In 1932 a group of activists who believed that people were being unfairly denied access to large swathes of Britain’s countryside staged a mass protest that ultimately led to the passing, many years later, of the Countryside and Rights of Way Act 2000.

The landscape offers some excellent walks, but as ever in the Peak District, the weather can be unpredictable, and unwary walkers can often get caught. Despite their familiarity with the area, a walking group led by Darius Roth, a man who’s obsessed by a family connection with the original Kinder Scout activities, is caught out by heavy fog, and what might originally have seemed like a simple hike soon turns problematic when one of the group injures his ankle.

The group quickly falls foul of that good old horror story trope when they split up, still in thick fog. What could possibly go wrong? Yep, you guessed it, one of the women takes a tumble off the aptly named Dead Woman’s Drop. Naturally, no one knows how it happened, and no one remembers being anywhere near Faith Matthew when she fell to her death.

DI Ben Cooper isn’t sure whether he’s looking at nothing more than a tragic accident, but it soon becomes clear that there were tensions in the somewhat enigmatic Darius Roth’s walking group, and the plot thickens – along with the mist – when a note is found on Faith Matthew’s car, telling her to ‘fall down dead’. A coincidence or a threat?

Fall Down Dead has something of a golden age country house mystery about it. Ben Cooper has to look for both motive and opportunity as he delves into the lives of each member of the walking group, as well as learning more about Darius Roth and his wife. To be quite honest, none of the group were particularly memorable, and I stayed on board more for the sub-plot involving Cooper’s former colleague DS Diane Fry. She’s never been that much of a standout character for me, but here, as she faces an internal standards enquiry, I was intrigued by what her interrogator was trying to uncover as he picked over various incidents from her past.

Stephen Booth can always be relied on to deliver a very serviceable police procedural, although this one fell somewhat short of the interest that previous books in the series have generated for me. Handling a large character set is never easy, and the dead woman wasn’t very memorable either, but in Booth’s hands, Kinder Scout took on more than enough character to make up for any other deficiencies. And after all this time, I’m now starting to warm to Diane Fry and it was interesting to see her more vulnerable side in this book. Asking for help isn’t something that comes easily to her, and so when she feels the need to rely on others, you know her back is against the wall.