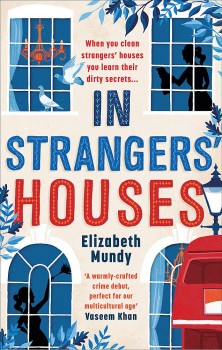 When Lena Szarka’s best friend goes missing, she has problems getting anyone to take notice, so she decides to combine her day job as a cleaner with some sleuthing to find out what’s happened to Timea.

Lena Szarka came to work in London in the hope of forging a better life for herself as well as being able to send money back to her family in Hungary. And she was able to persuade her best friend Timea to come along too, so that she could more easily support the son she had left behind. The two women share a flat with Tomek, Lena’s Polish boyfriend, and work as cleaners.

When Timea fails to come home one day, Lena is immediately worried and does her best to find out what has happened to her friend, even though neither Tomek nor the police seem to share her concerns. But Lena knows that something had been bothering her friend and she’s determined to get to the bottom of her disappearance.

Even at the cosier end of the genre, a disappearance rarely ends well, and it comes as no particular surprise when Timea’s body is found floating in a canal. The police are inclined to dismiss this as suicide, but the feisty, resourceful Lena isn’t so easily fobbed of. She teams up with the newly-minted PC Cartwright, and the pair go off-piste to make their own investigations into Timea’s death.

Elizabeth Mundy’s debut brings a vivid cast of characters to life on the page. There’s Lena’s mother Greta who descends on the flat with Timea’s son Laszlo in tow and promptly starts making mounds of sandwiches for anyone who happens to be in her vicinity. Boyfriend Tomek prefers to spend his time at home on the sofa, eating and grumbling about stomach pains rather than getting out to do his job driving an Uber. Then there’s Lena and Timea’s childhood friend, the unfeasibly good-looking Istvan, who’s hit the big time in a UK crime soap playing the lead police officer role, which naturally makes him an expert on how a investigation should be carried out.

In Strangers’ Houses sees London from the bottom of the social divide, and shines a sharp light on the life of those who spend their days and nights acting as unpaid childminders and confidantes as well as cleaning up after clients who think nothing of leaving their mess to others to deal with. Lena is bright, determined and resourceful. Cartwright is very much her sidekick rather than the other way around, which makes a nice change. Although what teaming up with Lena will do for his careers prospects is anyone’s guess, as Lena is often happy to rush in whether others might fear to tread, and between them, they have a rather casual attitude to evidence-gathering. But this isn’t a book to read if you’re after a penetrating, gritty look at police practice and procedure.

Where Mundy scores highly is in her ability to paint vivid pen portraits of her characters and their lives. There’s plenty of gentle humour – and an abundance of sandwiches whenever Greta is around – as well as some excellent characterisation. I was so taken with Lena and her family and friends that I was pleased to be able to make an immediate start on the next book in the series. Lena Szarka is a welcome addition to crime fiction diversity and Mundy is a fresh voice in the genre, drawing ably on her Hungarian heritage to craft a well-rounded main character and bring the world she lives in to life.