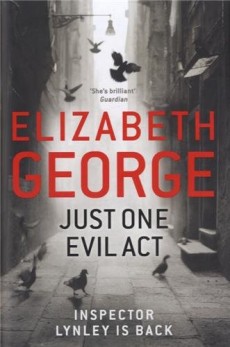 One of DS Barbara Haver’s neighbours, a child, is abducted and her mother is also missing. The child’s father takes extreme measures to try to retrieve her while Barbara lets her emotions control her actions.

DS Barbara Havers is very fond of her neighbours, Azhar, Angelina and their daughter Hadiyyah. When Angelina and Hadiyyah go missing it is inevitable that Barbara tries to help Azhar, particularly when Angelina and her boyfriend accuse Afzar of abducting Hadiyyah.

The search for the little girl involves a private investigator and his team, the Italian police, a journalist from a newspaper with a poor reputation, and of course DI Lynley, Barbara’s side-kick in the Metropolitan Police. Unfortunately once light is shed on the first crime then another one almost immediately follows. Barbara’s attempts to help Azhar place her in an impossible position regarding her day job at the Met. She is completely driven by her emotional link to the family.

This is a huge book, a mammoth read, and there are times when I wondered whether the length is necessary. One Evil Act is set mainly in London and in Lucca, Italy and no effort is spared to enable the reader to picture the settings in which the action takes place. Long pieces of descriptive prose are not present, however, and instead the scenes emerge amongst the dialogue. Elizabeth George’s stunning ability to use silences to paint pictures is illustrated again in “a moment of tight evaluative silence among them”, which so clearly pictures an awkward and tense moment in a meeting between some of the characters. Barbara herself is described through reference to what she does, how she speaks, what she thinks, the contents of her house, as well as through her choice of clothes.

The story is not particularly fast moving, and there is very little real tension that something awful is about to happen. Instead throughout the story there is a feeling of considered thought and almost inevitability about the progression, all driven on by Barbara’s convictions and emotional responses to events. Given how pivotal she is in the story it seems a shame that the end of the book returns to focus on the male detective, DI Lynley.

However, whilst Barbara’s role is the main storyline, there are in fact multiple layers of story involving the whole cast of characters. George’s attention to detail is impressive. The Italian justice system, and the use of technology to fabricate or alter evidence, for example, are both thoroughly researched. Interesting issues too are addressed about possible relationships between police and press, and the potential hazards of these.

Although long, this book is definitely worth the read – it is an interesting and very well written piece of psychological fiction, which maintains interest throughout.