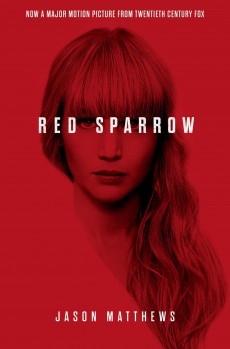 First of a spy trilogy by a 34-year CIA veteran, which revolves around the tangled relationship between a male rising star of US intelligence and his female Russian counterpart.

It wasn’t until after I’d finished Red Sparrow, the first in Jason Matthews’s trilogy of spy novels focused on the emerging, new US-Russian cold war, that I looked at the author’s biography. All the way through, the book had struck me as unusually authentic. Here was a man who seemed to know his espionage onions, from the finer points of the methods used by agent handlers to evade surveillance to the sadism deployed by interrogators in Moscow’s dungeons.

Then I read the reason: Matthews spent 34 years with the CIA, serving in some of the world’s most difficult locations as a case officer and a station chief. No doubt his secret work will stay that way for decades, but if it was half as good as his fiction, he must have been one hell of a spy.

A lot of spy novels take in intelligence agencies’ high-stakes office politics, but none I have read do so as convincingly as Matthews. He really knows and understands the murky world to be found inside the Washington beltway, with its desk-bound espionage warriors, fierce internal conflicts, and potentially disastrous Congressional leaks. He jumps effortlessly between this and his other locations – Russia, Finland, Greece, in the process lending richness to both.

Since the end of the first Cold War, a lot of spy fiction has seemed a bit aimless, lacking the sense of broader historical context, of the struggle between two systems for global domination, that used to give it meaning (vintage Le Carré being the obvious exemplar). Matthews’s trilogy has it in spades, and given the political events of the past two years on both sides of the Atlantic, it could not be more relevant.

His principal characters are Nate Nash, a fledgling CIA case officer from a difficult Southern background, and the beautiful Dominika Egorova, the niece of a top Russian agency spook who gets drafted into the SVR (successor to the KGB) after an envious rival wrecks her career in ballet. It is her misfortune to be sent to ‘Sparrow School’, the academy for spy seductresses used to bait honey traps, but it soon becomes clear she is destined for much greater things – not least a tumultuous, ambiguous affair with Nash.

Red Sparrow, first published in 2013, was made into a film starring Jennifer Lawrence that garnered lukewarm reviews. I haven’t seen it, but I found the novel’s taut plot as gripping as its realisation is believable. The rest of the trilogy, The Palace of Treason (2016) and The Kremlin’s Candidate (2018) are pretty good too. The only thing I didn’t like were the (thankfully not too numerous) sex scenes, which frankly clunk. But overall, this is very sophisticated entertainment, and in a league rather higher than most of its recent competitors.

David Rose writes investigative articles for the Mail on Sunday. He is the author of six non-fiction books and a spy novel.