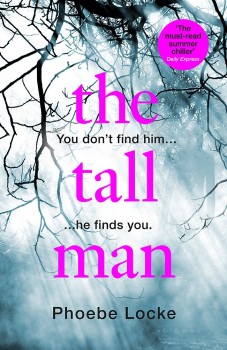 Sadie left 16 years ago to protect her baby daughter from the man who whispered in her ears. Now she is back, but she is not sure she has returned alone.

In 1990, Sadie made a pact with the Tall Man, one she could not break ten years later when she gave birth to her daughter Amber. She fled, leaving Amber with Miles. She believed it was the only way her daughter could be safe. In 2016, she returned, as Miles always knew she would.
Now, although Amber has been acquitted, she is a celebrity teenage killer. It is Greta’s job to smash the icy wall that the young girl has built around herself. It is her job, whilst filming what could be the documentary of the decade, to find out if Amber is another victim of the Tall Man’s bidding. Or if she is truly evil.
The Tall Man’s plot is based around an urban legend that has startling similarities to the Slender Man; a myth creeping around the internet since 2009, scaring anyone, adult or child, who falls for the improbable. The Tall Man whispers promises and horrific threats in equal measure into the ears of children. It’s a fascinating premise, and one that I looked forward to getting my teeth stuck into. I finished the book sitting on a fence.
I love Phoebe Locke’s sharp observation and unique descriptive style. It is senses-driven writing at its best and drags the reader into an atmospheric, three-dimensional world. Unfortunately, the swathes of picture-building slow the pacing to the point that I found myself leap-frogging paragraphs in search of dialogue, action – anything to prove the story was going somewhere.
I enjoyed the time-warp of the story spanning three eras; Sadie as a child, as a young mother, and multiple characters in the present day (2016-2018). But while sometimes it helped drive the story forward while keeping the suspense up, at other times it felt confused and messy.
Locke has written the book from multiple points of view, each in the (fairly) closed third person. I struggled to hear distinct voices, again because there was a lot of character-observation and narrative about their environments. At the start, the tantalising introspection gave me an illusion of climbing into the minds of each main character. But after a while, I realised there was a huge amount of cherry picking of the characters’ thoughts in an attempt to string out the suspense. And the characters fell flat. I also found the occasional change of character point of view mid-paragraph extremely grating.
There are spooky parts to The Tall Man, also beautifully written. Unfortunately, too many of them went nowhere and felt like padding. I would say the same for the documentary-crew relationships.
I did not come away from this novel with a greater sense of psychological understanding of children who kill. It is more a whodunit that doesn’t even expose what they did until almost the end. Yet despite all the above, I did enjoy The Tall Man. It is an easy read, and even if the story only picks up pace during the final third, the writing style is a breath of fresh air and beautifully polished.