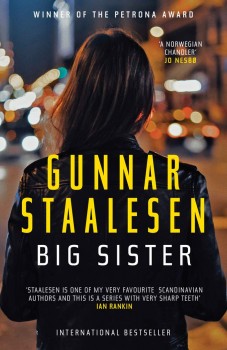 Bergen’s PI Varg Veum is approached by a woman who introduces herself as his older half-sister and who wants him to find her missing goddaughter. The search for 19-year-old Emma takes Veum on a personal journey into the past.

Varg Veum, Bergen’s most famous private investigator, always takes on impossible cases, usually at great personal and financial cost. As a former social worker he simply cannot ignore cries for help, especially when children or young people are involved. But when on a cold November day he receives a visitor who introduces herself as his half-sister, he has no idea how painful this investigation will turn out to be.
Varg is aware of Norma Johanne Bakkevikk’s existence, but he had never met her before. Norma wants to establish some connection and talk about her own past and family matters. But her main reason for approaching Veum is to ask him to search for her goddaughter Emma Hagland who had vanished without a trace three weeks earlier. The police aren’t interested in her disappearance. Emma, a 19-year-old trainee nurse in Bergen, had moved from Haugesund and cut contact with her mother Ingeborg. She didn’t leave an address, and stopped answering the phone.
An intrigued Varg starts by contacting her father Robert Høie Hansen, estranged since she was two years old; knocks on the door of the shared flat where the girl lived, and tries to talk to the landlord. He manages to get hold of her closest friend Åsa, now thriving in Berlin, and devasted by the news of Emma’s disappearance. He travels to Haugesund to stay with Norma and to get to know Ingeborg, a very unhappy woman, who relies on pills and alcohol.
Very slowly a terrible story emerges, going back to 1975 when a schoolgirl was viciously raped, leaving her completely catatonic. Then everything pointed at Robert, only 15 at the time. He was accused of this horrendous assault, but as the case never was investigated by the police, he chose to escape from the place, the accusations and start a new life away from suspicions in a small religious community.
When Ingeborg found about his past, she threw him out of the house and Emma’s life. Neither she nor Norma can see any connection between ‘this old business’ and Emma. But Veum digs deep and discovers that Emma found her father also living in Bergen with a new family – and was rejected. This must have been a terrible blow to her.
As always, Varg Veum is determined to complete the job, to find the girl. Also, he is motivated by the curiosity to learn more about his own family as snippets of information from the past keep shattering vague memories of his own childhood. Varg reminisces about his father, tram conductor Andreas Veum, fascinated about Norse mythology, but not interested in his son, and mother Ingrid, quiet and distant. He follows a trail leading to a jazz quintet from the interwar years called the Hurrycanes, and to questioning his own history.
Dry humour and stoicism usually save Veum from the most dramatic and life-threatening situations, yet here it seems that his luck might run out as he faces an extreme biker gang, a dangerous internet cult and his own feelings of displacement.
Big Sister is superbly translated by Don Bartlett, and is painfully sad, desperate in many ways, and very reflective, too. Gunnar Staalesen weaves an intriguing plot, with parallel strands of two fractured families, steeped in human tragedy. He uses his own passion for jazz beautifully to indulge in sharing the emotions and shaping the story with the bittersweet allure of music. Is it too much to say that I love this PI? I do, and each gripping, chilling and shocking novel presents a new aspect to Veum’s character.