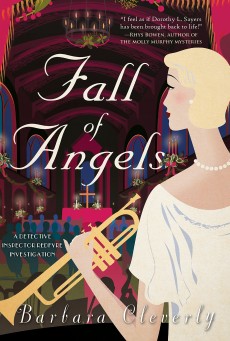 Cambridge Detective Inspector John Redfyre investigates what appears to be the attempted murder of a female musician and is dragged into a nightmare of misogyny and murder as other killings quickly follow.

In the early 1920s, the intellectual hotbed that is home to one of Britain’s great universities is on the cusp of dramatic change. The Great War is over. Some women have the vote, but the suffragette campaign is re-gathering its forces to press for that right to be extended universally.

Diametrically opposed to them are the misogynistic, all-male bastions of the colleges who refuse to award degrees to female students, will not allow female musicians to perform on their premises and are happy pass the port around the High Gables as the city continues to war with itself.

Detective Inspector John Redfyre is a godsend to Cambridge CID. He’s young, handsome and capable, a war hero, born to one of the better families and raised among the colleges, unlike the ‘outsider’ Bartholomew, and he has access to the educated élite – a society previously deemed impenetrable by the local police, who are still expected to use the servants’ entrance.

His aunt, eager to make a suitable match for him, gives him a prized ticket to a college Christmas concert featuring a trumpet soloist, accompanied by the organ. Scandalously, the trumpeter is a stunning and talented young woman, hitherto considered completely unacceptable in conservative academic circles.

When she tumbles down a staircase after the final curtain Redfyre finds evidence that someone planned her death. And when more women are murdered, he realises some of his friends or even family may be targets, and alarmingly that the killer may be within his own close circle.

So far, so good. Where this often sharp and witty tale falls down is that it is all just too self-consciously pretentious.

Wonderful asides such as the warning to women that they should never play musical instruments such as trumpets or cellos – “You are to have no truck with any instrument you have to put in your mouth or between your legs” – are lost as the toffish Redfyre, horribly adept at wordplay, spends as much time translating Latin bon mots for his bemused staff as he does on solving the killings.

Although Cleverly’s scene setting is vivid and skilful, it is very much an American TV version of Britain 1923, still struggling with its wartime legacy and new innovations such as the telephone, while doing little to erase the class distinctions of earlier generations.

Many of the characters are almost the stereotypes beloved of TV drama. Prime examples are Redfyre’s redoubtable Aunt Hetty and his boss Superintendent MacFarlane, the “grammar-school educated with few social graces”, but an intelligent and ambitious Yorkshireman.

Even the story’s strongest point of the historical theme of early feminism and the resistance to it is diluted as the members of a radical suffragette circle Redfyre investigates as potential targets alternate between being flirty and hostile – and on more than one occasion are economical with the truth, concealing what might be vital information.

That, plus their unnecessary trick of referring to themselves by their pseudonyms as Roman goddesses, sloppy and muddled plotting, and some seriously overwrought and overlong writing, and a rushed and improbable denouement, gave me the impression Cleverly has at least temporarily lost the ability to construct a good procedural plot.

Fans of Julian Fellowes’ Gosford Park or Downton Abbey, particularly those on the other side of the Atlantic, will absolutely love this, but more discerning and conservative British readers will, I expect, find it disappointing.