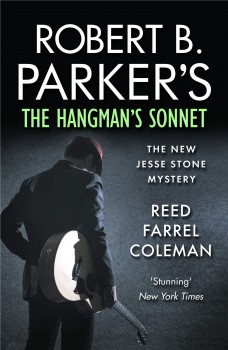 Robert B. Parker's The Hangman's Sonnet

Sheriff Jesse Stone investigates a murder that appears linked to re-awakened interest in a 40-year-old recording that mysteriously disappeared.

This latest is the 16th outing for Jesse Stone, a character created originally by Robert B Parker, and the fourth in the series written by Reed Farrel Coleman. Stone initially arrived in Paradise, a small town 15 miles north of Boston, escaping a drink problem and an unhealthy relationship on the West Coast.

Stone still has the problem with whisky and has been hitting the bottle hard after the loss of his fiancée Diana in his last adventure. Luckily, he has the support of his subordinates including his assistant Molly and ME Tamara, which helps prevent his condition becoming universally known, although Mayor Walker is always on the lookout for a slip-up to oust him.

But Stone manages to sober up enough to act as best man for the wedding of his protégé Suitcase Simpson, and the same day learns of a gala 75th birthday party planned for Terry Jester, once a folk legend rivalling Dylan in stature but now many years in seclusion. The anniversary is re-igniting interest in a master recording tape of Jester’s opus The Hangman’s Sonnet, which disappeared 40 years ago and if recovered would be worth millions of dollars.

The same morning an elderly resident of the town is killed when two men ransack her house. It takes some time to discover that the engineer in the studio when the Hangman tape was recorded once lived at the property, making him the prime suspect when an offer to sell the tape is received. By that time, however, further murders have upped the ante, and Stone is either going to have to solve the case or come in for severe criticism.

Those who enjoy the series will no doubt be pleased with an extension, although some may find Stone’s continued inability to deal with his alcoholism a little wearing. He seems surprised to hear, midway through the book, that his friends find his binges selfish – self-deception is one of the failings of addicts but after so long a man with honed detective skills might have been expected to work that out for himself. Since he seems to be propositioned by any attractive woman who crosses his path, perhaps he thinks he doesn’t need to.

I had some difficulties with the plot, too. The holder of the tape has an obvious interest in creating some publicity with a view to boosting its cash value, and instigating mysterious goings-on centred on Jester and his work. But criminal activity has significant risks attached, which could have been avoided with a modicum of creative thought.

Perhaps I am being over-particular; despite his defects Stone remains the rock-solid character he has ever been and has the right instincts when it comes to tackling criminals. He also knows the right people to go to for help, including a certain Spenser from Boston.