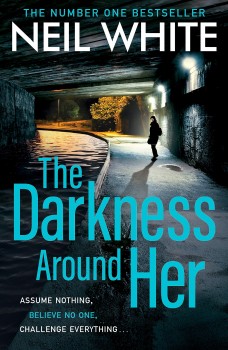 The Darkness Around Her

Lawyer Dan Grant is asked to represent Peter Box, who has been accused of murder. The evidence looks damning and to make it worse Box refuses to explain what happened.

Dan Grant does mainly criminal defence work at a firm of solicitors in the small Pennine town of Highford, and early in the book is devastated to hear that his boss and mentor, Pat Molloy, has terminal cancer. Molloy offers the firm to Grant, who is interested but distracted by a case which has dropped in his lap.

At the turn of the year a woman was drowned in a canal. The blood on her shoe heel was matched to Peter Box, found seeking treatment in hospital for a head wound. Box demands that Grant, qualified to represent clients both as a solicitor and in court, act as his sole representative, but refuses to give any information which would help the defence.

Grant is, however, given a line of enquiry by Molloy, who is unhappy about a past case involving Shaun Martin, someone he successfully defended on a murder charge, but whom he now believes to have been wrongly acquitted. There is an established connection between Box and Martin, and Malloy suggests that a means to clearing Box would be to show that Martin was a killer.

Grant has some help in his quest from Jayne Brett, an ex-client now scraping a living as a private investigator, and Bill Maude, the father of a victim who has been collecting information about a series of disappearances and deaths in the area. A significant proportion of these cases occurred close to a canal which runs through the town, a fact which proves to be the key.

While the early part of the book focuses primarily on Grant in court and Brett digging for more information, we are gradually permitted to hear more from Martin and his wife Trudy. It becomes evident that they have something to hide, and that Grant and his friends are in far greater danger than they realise. This sets up the tension for the ending.

The author’s personal experience no doubt informs the convincing picture he provides of a young criminal defence lawyer vulnerable for lack of experience and his class background, but able to marshal his thoughts under pressure to good effect in the courtroom. The other characters also come across as realistic, with their own personal struggles set against the parochial concerns of a small community.

This is the second book featuring Dan and Jayne, who get so close to a relationship that a third outing looks likely to lead to consummation. In the meantime, the mixture of legal action and crime is something that is likely to appeal to a range of readers.