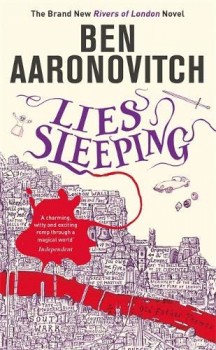 The Faceless Man is back and it’s up to DC Peter Grant and his colleagues from the Folly to stop his latest murderous spree and stop him unleashing chaos on London.

Ben Aaronvitch’s Rivers of London series is back. This ever-entertaining mix of police procedural and urban fantasy has gone from strength to strength, and now London copper Peter Grant and his colleagues who specialise in ‘weird shit’ – more properly known under the codename of Falcon cases – now have a dedicated incident room in the Folly.

The Folly are currently up to their eyes in Operation Jennifer, which now wraps up a whole series of operations relating to Martin Chorley, aka the Faceless Man, and his associate, Peter’s former police colleague Lesley May. Chorley is wanted on a number of charges, including murder, fraud and conspiracy to cause an explosion, and catching him is a priority. Naturally the police hope that the Folly will keep things low-key, but magic and policing can be a volatile mix, as longsuffering DCI Alexander Seawoll knows all too well.

Lies Sleeping showcases the best of Aaronovitch’s writing, although there were times when I felt the gags were coming a little too thick and fast. But despite that, Peter’s wry asides on policing and magic are always amusing, as are his observations on his colleagues and the situations they have to deal with. The stakes are high in their latest outing, especially as it looks like Peter and the others will have to go up against the malevolent Mr Punch, a supernatural killer and general stirrer-up of chaos, as well as dealing with the Faceless Man’s latest murderous spree.

For me, one of the stand-out characters in the series is Peter’s boss, the urbane DCI Thomas Nightingale, a powerful magical practitioner apparently born in the early 1900s but who has the appearance of a man in his early 40s. Throughout the series we’ve had tantalising glimpses of Nightingale’s past, learning that due to an unspecified incident in the 1960s, he’s now started aging backwards, although how fast this is now happening isn’t clear.

At one point, all we had to go on with regard to Nightingale’s power as a magic user was the brief mention of how, during the battle of Ettersberg in the Second World War, he took out two Tiger Tanks with fireballs. The series has now moved very much into ‘show not tell’ territory, and in Lies Sleeping, my hopes of seeing Nightingale in a fully operational role are finally satisfied and yes, those scenes were well worth the wait.

The book also shows Peter’s developing relationship with Beverley Brook, goddess of one of London’s rivers, and brings back his niece Abigail, now an apprentice at the Folly. I was pleased to see the other denizens of the Folly - Molly the ethereally vampiric housekeeper and Toby the ghost-hunting dog – making an appearance. I also enjoyed seeing more of Seawoll. The studiously polite sparring matches between him and Nightingale are always good value.

The increased focus on police work worked well for me, grounding the series firmly in reality. Aaronovitch always serves up a richly diverse crew, from acerbic DI Miriam Stephanopoulos to newly-promoted Somalian-born DS Sahra Guleen, who provides pragmatic commonsense and competent back-up for Peter throughout the case as he faces his biggest challenge so far, which sees him heading rapidly for a confrontation with the Faceless Man himself, someone whose magical abilities make Peter’s pale into insignificance.

Aaronovitch handles a large cast with consummate skill and delivers humour and tension in equal measure. As ever, one of the biggest characters in the book is the city of London, which always comes alive in his hands, as he delivers a wealth of fascinating detail, as well as an utterly authentic feel for the city and its darker side. Reading the series, it’s all too easy to believe that there really is another dimension to the capital.