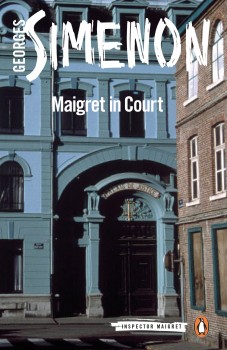 When a woman and child are murdered, Maigret finds himself in court, uneasy with the way human events are distorted through the prism of official proceedings.

Maigret in Court finds the detective aged 53 and contemplating retirement. At this stage in his career Maigret is not doing too much running around, but can be found mainly in the Quai d’Orfevres pondering his next move while directing Lucas, Janvier and other underlings like pieces on a chessboard.

As the book opens, Maigret is in court at the trial of picture-framer Gaston Meurant, who is accused of the dual murder of his Aunt Leontine Faverges and her four-year-old ward Cecile Perrin. Maigret’s evidence helps to secure the acquittal of the accused, but Meurant is not happy. He has been cleared, but only at the cost of the reputation of his wife Ginette, who is shown to have been visiting hotel rooms with Gaston’s brother Alfred, and subsequently with another man.

Maigret understands well that Meurant is infatuated with his wife and that upon his release a further act in the drama is still to be played out. Police are deployed to shadow Meurant as he travels down to the Riviera to visit Alfred, and then returns north to take revenge on the man who has wronged him.

If the age of the book is anywhere particularly evident, it lies in the dozens of minions which Maigret has at his disposal to keep Meurant under observation even after he has been cleared of any crime, a profligate disposition of resources which I’m sure would produce a hollow laugh from any current-day Divisional Chief Inspector.

It is not often that we hear Maigret actually giving evidence in court, and Simenon gives us some insight into the detective’s feelings about proceedings. Maigret solves his cases by absorption of the atmosphere and by a complete understanding of the human feelings of the people involved. To Maigret the court’s formalities trample these feelings and substitute a sort of macabre ceremony, unintelligible to the participants, where the individual’s concerns count for nothing.

What Maigret fails to recognise, perhaps, is that from the perspective of the man in the dock, the police are very much part of the system. But Maigret, at least, has sufficient sympathy with Meurant to allow the man more freedom than might be authorised under the law.

Maigret has a habit of acting as both judge and jury from time to time, and much as one might approve of the sentiment his actions sometimes seem both shocking, and liable to get him into trouble. With his reputation so solidly established, however, I daresay we needn’t worry too much.