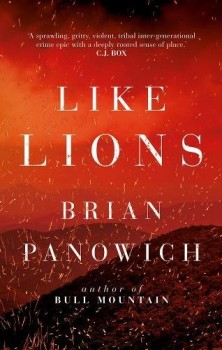 Sheriff Clayton, the last surviving member of the Burroughs family which for decades ran drugs from Georgia’s Bull Mountain, comes under attack from a rival clan.

Like Lions follows directly from Bull Mountain, in which Clayton Burroughs was caught between his brother Halford and the federal agencies poised to close down the manufacture and transport of narcotics at the home of the Burroughs family. In the brutal struggle which followed, Clayton was severely injured and Halford killed.

Even with Halford out of the way, things have become little easier for Clayton. The after-effects of his wounds have left a legacy of weakness and pain, and self-medication with whisky and oxycontin is not helping his thinking, and neither is the relationship between Clayton and his wife Kate. A more immediate threat is offered by the Viner clan, long-term enemies of the Burroughs, who sense an opportunity to move in and take over the traditional long-term business on Bull Mountain.

The Viner attack is guided by brother Coot and sister Vanessa but begins with a raid on ‘The Chute’, a disreputable poolhall nominally in Burroughs territory. The ill-executed robbery ends with the death of Jojo, the youngest of the Viner Clan. The Viners now have a double reason to confront the Burroughs, and Coot feels no restraint in undermining Clayton’s authority, or of planning terrible revenge against him and his family. Vanessa’s role is less evident, but occasional passages highlight her willingness to get her own way and she’s prepared to murder if necessary.

In his state of depression, Clayton is ill-equipped to meet such a determined attack, and for a time it looks like the Burroughs will go under. They have friends but to combat the Viners and an allied group of bikers, leadership is required. Clayton and Kate are, however, more resilient than is evident at first sight, and ready to take the least opportunity offered to protect their family.

As with Bull Mountain, the book confirms just about every prejudice about hillbillies – dirt-poor folk whose ignorance is as deplorable as it is spectacular. This is life in the raw, with little sophistication, just a hard grind to make a living. There are few newcomers, and few who manage to leave; most of the locals have been there for generations and their neighbours know their strengths and weaknesses only too well.

Much of what goes on in McFalls County is horrifying, but maybe this is part of what makes the story so compelling. Many of the characters are larger than life but the writing convinces. In a very male-dominant society it is also good to see several strong female characters, including Kate in particular. The concluding scenes are thrilling, with a final twist that not everyone will see coming.