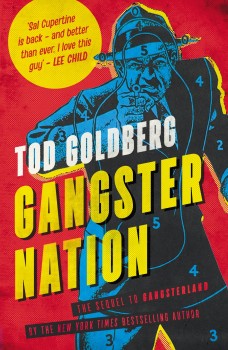 Mob hitman Sal Cupertine escaped from Chicago in a meat truck after killing three FBI agents, but hiding out in Las Vegas as a Rabbi has its problems.

Ten-year-old Sal Cupertine got an early lesson about life when his father was thrown off a 52-storey building. Sal eventually became the Chicago mob’s top executioner, known as Rain Man for his retentive memory. The Family smuggled Sal out of town after a particularly egregious bit of wet work, and left a trail suggesting he was dead.

Unfortunately for Sal, his survival was discovered by FBI agent Jeff Hopper, whose embalmed head showed up in a Chicago dumpster shortly thereafter. To avoid detection Sal has had facial reconstruction, but the job was bodged and keeps him in constant pain, not to mention that his face threatens to fall apart at the slightest tap. He is also missing his wife and young son, but knows he cannot risk getting in contact.

For the time being, however, he has been transformed into Rabbi David Cohen, ministering to a fairly wealthy Las Vegas neighbourhood. With income from the several scams he is running at the synagogue and its attached schools and funeral home, he hopes soon to be able to collect his family and depart for a new life abroad. However, ex-FBI agent Matthew Drew is looking out for any scrap of evidence that becomes available about Sal and is rewarded when a series of events put him on the trail.

Meanwhile, Ronnie Cupertine, the head of the Family, receives an approach by Peaches Pocotillo, a senior figure in the small but ambitious Native Mob. Peaches offers Ronnie a partnership which will combine the strengths of the two organisations, but events reveal that Peaches has something else in mind.

Gangster Nation follows directly from Gangsterland and continues the exploration of organised crime in the US. The narrative takes the reader straight into the heads of the key protagonists: Peaches, Drew and Cal himself. It’s a completely convincing rendition of the thought processes of men who thoroughly understand how money and power is gathered and used. The exercise of power, entirely without scruple, is at times macabre and horrifying while at others very funny.

Eventually the reader is presented with the proposition that the scams worked by organised crime gangs are no different from what goes on in the rest of society; the game is rigged everywhere you look. ‘The whole world was a f****** ghetto, the whole nation filled with gangsters’. The author makes a pretty convincing case.

Whether you go along with that very depressing message, there is no doubt that the book grabs the attention. The plot is advanced in an expert manner, moving from one area of action to another with exquisite timing, and the dialogue captures the vernacular perfectly. Comparisons with the master, Elmore Leonard, are in order and there can be no higher praise.