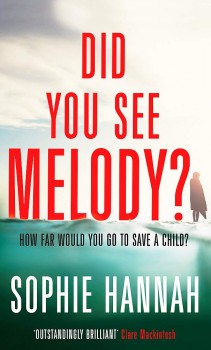 Did You See Melody?

Cara Burrows needs time away from her family to think. At her holiday resort, she thinks that she sees a young girl who had, according to common belief, been murdered some years previously.

Cara Burrows is expecting her third child. Her family are not too sure about the effect this new addition might have on them. She is naturally rather upset and needs time away to think, so she books a holiday on a luxury campus in Arizona. Unfortunately, she goes on the holiday telling the family nothing about it except her expected return date.

On arrival, there is a mix-up and she is sent, late at night, to the wrong room - a room that is already occupied by a man and what appears to be his daughter. The next day as she begins to meet some of the other residents she realises that this daughter may be a young girl whose parents are in jail for her murder some years ago. Her attempts to investigate this are frustrated by the arrival of her husband, whereupon things go rapidly downhill.

The description of the holiday village will be instantly recognisable by anyone who has spent time on a luxury holiday of this type – from the various swimming pools to the free transport, the reception area and the luxury apartments to the coaching sessions and leisure classes. And of course, within all of this are the other residents who might be observed from behind a book on a sun-lounger. The description is insidious and the atmosphere seeps into the action effortlessly.

As so often with psychological thrillers the reader is inside the head of one of the characters, in this case Cara Burrows. The character moves from a numbing type of anxiety about the pregnancy and her family; through annoyance at the other residents; curiosity about what she thinks she saw; and fear about her own safety. Indeed, her experiences see her grow in confidence until eventually she is able to think constructively about what to do, despite everything that subsequently happens to her. At times her thinking can become quite tedious but just when it is about to be unbearably so, something happens and the author takes us off in a different direction.

Although the story is told in real time, it is sometimes interrupted by the insertion of other pieces of text, for example pieces of past evidence, or past conversations, or even the thoughts of other people. On the whole this works well as it reflects the investigatory nature of Cara’s approach to her problems.

This novel raises a number of issues, some of which only become clear right at the end with the clarification of what Cara saw and the discovery of how it came about. It is an intricate plot with numerous twists and turns and quite a shocking finale. The book is totally compulsive and almost impossible to leave once started, even though sometimes the wish to put it down is almost overpowering!