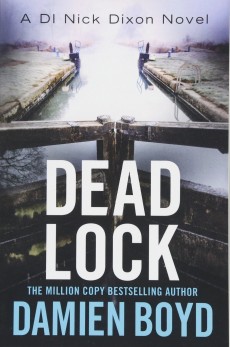 The hunt for a missing ten-year-old girl intensifies when a second girl of the same age disappears. The police believe the two are connected, and DI Nick Dixon is called back from holiday to help the investigation,

When ten-year-old Alesha Daniels goes missing, Avon and Somerset Police suspect she’s been abducted. Her parents are separated, they both drink too much and take drugs, and on top of that, her mother is living with a convicted sex offender. Alesha’s bike is found in a lake but there is no trace of her, despite an extensive search.

Then a second girl, Hatty Renner, also aged ten, sets out from home to walk to school but never arrives. The police fear the two disappearances are connected. Hatty is the granddaughter of Dr Roger Poland, the senior Home Office pathologist. At Poland’s request, DI Nick Dixon is called back from a holiday in the Lake District to assist in the investigation.

This is the first of Damien Boyd’s West Country police procedurals that I’ve read, so it came as rather a surprise to find that the main character doesn’t appear until about a quarter of a way through the book, but I liked the minor characters so Dixon’s late appearance didn’t cause me a problem. To be honest, when he did appear, I found him rather annoying, as he swept in like a classical deux ex machina with a very know-it-all attitude and promptly started to show up deficiencies in the investigation. I wasn’t surprised that at least one of his superiors was equally irritated by the prodigal’s return.

The Somerset setting is well drawn, providing an atmospheric backdrop to the increasingly complicated investigation. Boyd adds multiple layers of complexity and there were times when I had to back track a few pages to make sure I hadn’t missed anything. The story is considerably more intricate than a simple investigation into missing children and I found myself increasingly caught up in a tangled tale of banking and blackmail.

Boyd puts his legal background to good use and the plot holds up well to scrutiny as the various strands start to unravel. I was on the lookout for plot holes, as I always am with this sort of thing, but nothing jumped off the page at me, and although I did twitch a couple of times, I felt it all held together pretty well.

The author ramps up the tension well in the closing stages, and I was turning the pages quickly, glad I had an uninterrupted hour on the train with nothing to do but read. Dead Lock is a good, solid police procedural, and I can well understand why readers keep coming back for more.