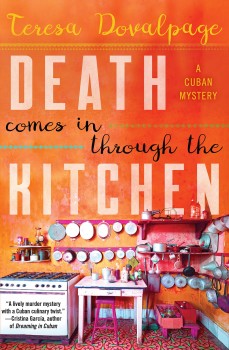 Death Comes in Through the Kitchen

A boyfriend finding his soon-to-be fiancée dead in her bathtub would be the start of a complicated tale in any country. But this is Cuba where layers of ambiguity and lies cover every aspect of life.

It is 2003. Matthew Sullivan, a food journalist from San Diego, has travelled to Havana, Cuba, to propose to his long-distance girlfriend Yarmila, a food blogger. But, by the time Matt gets to her apartment, wedding dress in hand, Yarmi is dead, and it's murder.

Matt, very much an innocent abroad, has to deal with the strange and complex culture of Cuba where nothing is as it seems on the surface. Communism and the santeria religion exist together as do rationing and paladars (private restaurants). Threat and bureaucratic farce assault him at once. He is very much adrift until Yarmila's friends come to help and hinder him.

Luckily Matt has a cast-iron alibi and Lt Marlene Martinez is tasked with investigating the crime. She is joined by Padrino, an ex-cop, private investigator and santero, who can call on the help of the orishas to help in the work.

As they talk to Yarmila's friends, parents and colleagues it soon becomes apparent that all was not what it seemed with Yarmila. They must find out why this lowly translator was running a food blog on the internet when she had no official access to it, why she had a long-distance relationship with an American when she had a lover at home, why a fanatical communist in her youth would strike up friendships with dissidents and how she was cooking impossible meals.

Dovalpage creates a rich and spicy mix of a book. She explores the vibrant, contradictory and occasionally bizarre country and society of Cuba. She also appears to be more interested in that exploration and celebration than the work of imagining a complex murder investigation. I also have a problem with the handling of the sexuality of one of the characters. This man, after an early flashback to being raped as a teenager, comes to find later that he is either gay or bisexual. I don't know if Dovalpage subscribes to the 'being raped makes you gay' trope, but the juxtaposition of the two events doesn't help her case if she doesn't.

Death Comes In Through the Kitchen is an interesting book, but more for the evocation of a country and society than for any skill in plotting a detective novel.