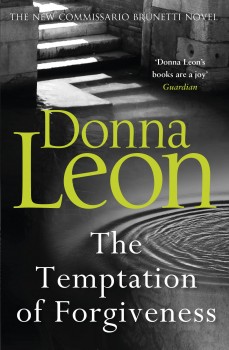 The Temptation of Forgiveness

An elderly man is discovered seriously injured at the foot of some steps down to a canal. By chance his wife has just spoken with Inspector Brunetti about the possibility of her son taking drugs. Are the two incidents connected?

A doctor comes to visit Inspector Brunetti to discuss her fear that her school-age son is taking drugs. As she is a friend of Brunetti’s wife, he feels that he must listen to her, but is not sure what he can do. Shortly afterwards, an elderly man, her husband, is found seriously injured at the foot of some steps down to a canal.

Brunetti and his colleague in the police, Claudia Griffoni, begin to explore any leads in both incidents and for a long time find very little to go on. The man’s elderly aunt, who has the beginnings of dementia, provides a vital clue when she tries to explain the shopping vouchers found in the injured man’s possessions.

The enquiries take Brunetti and Grifoni to various districts of Venice. The atmospheres and general features of these districts are all described in meticulous detail. It is interesting to hear about the everyday aspects of Venice such as the schools, the doctor’s surgeries and the pharmacies, and to begin to understand how difficult it is to live in a city that is so full of tourists and famous places. The daily journeys for elderly locals, for instance, can be a real challenge.

And it is interesting to hear some of the ways in which anyone who suffers from dementia might be manipulated and disadvantaged. The novel certainly encourages awareness of such current issues. In addition to elderly lives and dementia, mention is made of the freedom now for large cruise ships to enter some of the canals and the incongruity of it in such a historic place. Although the point is made that such ships bring in much-needed money, the question is asked whether or not the inevitable physical and social effects are worth it.

Much is also made of the differences in thinking of Brunetti and the two women in his life, his wife Paola and his work colleague, Claudia. Brunetti certainly uses them as sounding boards for his own thoughts, and both women are strong enough to stand up and be counted for their own views. Another strong woman is the doctor whose husband lies in a coma. All these people have very stable, conventional lives, strong foundations upon which to base their actions.

It is difficult to get hold of the crime in this novel. Is the injured man the victim of a crime or not? Is the young boy who may or may not be involved in drugs the victim of criminal behaviour? Is the elderly woman with the vouchers from the chemist anything to do with criminal activity or not? The discussions about all these are a bit protracted at times which makes the book feel rather drawn out in places. There certainly is not suspense at any point, so the story seems rather long and confused in its final stages. However, it is a relaxing read, based in an interesting setting and with a familiar detective.