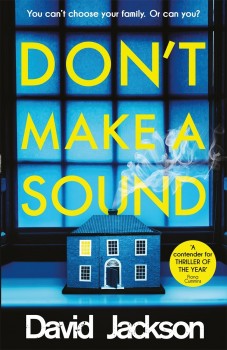 Malcolm and Harriet are about to have another daughter, a little sister for Daisy. All Malcolm need do is remove the flimsy lock and steal this latest child her from her parents.

Daisy is a quiet ten-year-old child. She studies, reads, draws and is always polite to mummy and daddy. Call it self-preservation.
Mummy and daddy, Harriet and Malcolm, are not well. She has problems with her nerves. He has never been right since he had an accident at work. But they feel now is the time to complete their little family with another daughter. And Malcolm has done his research. Poppy is his first choice. Not the name, although another flower is quite fitting. No, Malcolm has watched Poppy, and it is time to take her.
Liverpool cops DS Nathan Cody and DC Megan Webley have history. But even though their one-time relationship could be a sticking point, they trust one another, know one another and work well as a team. That’s just as well, because they are about to be called to deal with an abduction that will take one of them to the limits of human suffering.
Don’t Make a Sound is dark malignance in black and white. At first, I found the writing style off-putting. If it was an animal, it would be a push-me-pull-you. That it is written in the present tense gives it an immediacy that is completely at odds with its omniscient point of view that hops from one character to the next almost too fast. Even more disturbing is the incongruent and wholly unchildlike vocabulary when we are inside Daisy’s head. Yet the ten-year-old’s dialogue is convincing. I sat on the fence, only continuing to read the book because the plot felt fresh as it unravelled. I am so pleased I did. I soon acclimatised to the writing style, and the pacing whisked me along at a sharp rate.
The story is as twisted, knotty and gnarled as an old oak tree. There is plenty of action but be warned, a lot of it is not for the faint-hearted. There is believable introspection, and it is as if the author has climbed inside the minds of several extremely disturbed people, children and adults alike. This made the characters lively, vibrant, though there was a degree of stereotyping of Cody (the DS with more baggage than a long-haul plane).
At first the dialogue felt rather contrived and a means of info-dumping, but as the story grew wings, it settled. As always, I avoided reading the blurb, so was unaware that this the third book in the DS Nathan Cody series. I am thrilled I didn’t know. First, because I can vouch for it as a standalone book. Second, with the chapters hopping from the criminals to the victims and several members of the police force, it didn’t read like yet another standard police procedural.  Third, because I genuinely liked the characters enough that at the end, I was hoping we would be seeing more of Cody and Webley. There is plenty more mileage with the team.
Although I did not get much sense of the Liverpool setting, Jackson brought the immediate milieus to atmospherically convincing life, particularly Daisy’s room. There is enough about technology and today’s police procedures that the story is current.
Although I guessed early on where the story was going and the criminal’s raison-d’être, the brick walls and challenges do not let up for Cody and his sidekicks. If Jackson was a god, he would not be a benevolent one. Boy, does he know how to give his protagonist a tough time! And the end is gratifyingly empty of long-winded reveals. This was an assured voice combined with a sharp-paced story.