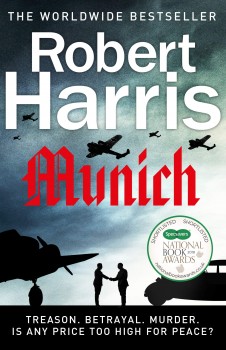 Britain in 1938 holds its breath as Neville Chamberlain, the Prime Minster, negotiates with Adolf Hitler to resolve the crisis of Hitler’s intention to invade Czechoslovakia. Two friends from Oxford, one German and one British, are involved in the discussion that takes place in Munich.

Hugh Legat is a member of His Majesty’s Diplomatic Service, quite a junior member, but one with potential. He loves his work but his personal life is less happy; he suspects his wife of infidelity. Paul von Hartmann works in the German Foreign Ministry. He and Legat had been very close friends some years earlier, when studying in Oxford University, and had spent time together in Munich. They have been estranged for a while.

Adolf Hitler has declared his intention to annex the Sudetenland, taking land that was historically German back from Czechoslovakia. He appears intent on doing this by force if necessary and as a result Britain, France and Germany stand on the brink of another great war, so soon after the end of Word War I. Neville Chamberlain, the Prime Minister, is determined to do all that he can to prevent this.

Hartmann, together with several key and influential Germans, is determined to stop Adolf Hitler because they view his fanatical leadership and increasing tyranny with horror. They have a plot to murder him.

The plot of this book is based on historical fact, all very well documented and analysed. Harris, by telling the story from the viewpoint of the two young men, manages to humanise the story. His descriptions of actions, places and mannerisms are hugely evocative of the time in which the action happened. As the negotiations are proceeding in Munich, the reader shares the breathless dread of the populations of both Britain and Germany, hoping that war will be averted.

Neville Chamberlain is presented with great humanity. He is given a warmth which is not always apparent when political debate is had regarding his actions at the time. When Legat stays in Downing Street, the description of his small servant room in the top of the house demonstrates just how far modern Britain has moved from the class-driven behaviour of the 1930s. The kindness of his treatment by Mrs Chamberlain and the way she supports and manages her husband are also very humanising and yet redolent of gender roles of the time, a feeling which Harris emphasises by contrasting it with Legat’s ill-treatment by his own wife.

In Germany, it is clear that anyone who deals with Adolf Hitler walks on eggshells. The ritual and fear that is experienced by all as they face a despot who has no interest in anyone except in how they can further and support his own erratic and controlling ideas. Only Mussolini appears able to have some form of mediating influence over his behaviour.

I found Munich fascinating. I researched contemporary photographs of events that are described and that enhanced the realism of the plot, and rounded off my enjoyment of this excellent book.