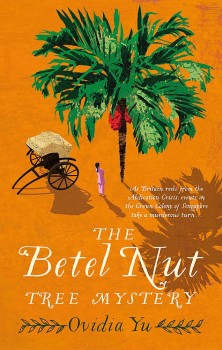 It is December 1936, and the crown colony of Singapore is taking the abdication crisis as seriously as other far-flung outposts of the British Empire. There is even a local parallel: Victor Glossop, the scion of a rich British distilling family, is in town and set to marry a beautiful American widow, Nicole Covington. Then Victor is found dead, his body adorned with pictures drawn in lipstick and soaked in red betel nut juice.

The investigation falls to Chief Inspector Le Froy of the newly-formed detective unit, and his staff. Chen Su Lin, his secretarial assistant, narrates progress with the case, in which she plays a leading part. Although the death is initially attributed to strangers, there seems to be plenty of strain within the group of people closest to the murdered man.

Nicole was travelling with her young son Radley, named for his father, now dead, and Radley’s grandfather, Taylor. The party had travelled from New York in company with Victor, and Kenneth Mulliner, his companion. Su Lin spends time in company with these characters. Nicole seems curiously indifferent to her fiancé’s demise, and subject to flurries of emotion. Mulliner appears strongly attracted to Nicole: perhaps he wished to take Victor’s place. Taylor seems more level-headed and avuncular, but later exhibits behaviour which suggests he is not all he seems.

From the first pages Su Lin shows herself to be intelligent and perceptive, aware of the need to maintain a detective’s objectivity, and to gather information as would a journalist, which she would like to become. She comes from a local family of some importance, although they do not advertise their wealth or influence. Su Lin herself has one leg shorter than the other following childhood polio, but does not allow her slight disability to interfere with her activities.

Being set in the 1930s, the story does have some of the feel of the crime novels of the time, albeit in an exotic location. However, this is no Agatha Christie, in whose stories the culprit is well concealed until the final reveal. Pointers are given fairly early on as to where the police should be looking, and there are one or two clues that no sleuth would be likely to overlook.

The tale does, however, have a certain amount of charm, with the mixture of races which make up Singapore all adding their own distinct flavour. The period in which it is set also adds interest: in the background – Japan is busy invading China, with Britain remaining stalwartly neutral, while Herr Hitler is growing in influence to mixed opinions in the West. The themes of Japanese spies and Chinese resistance activities may become even more relevant if this series is extended.