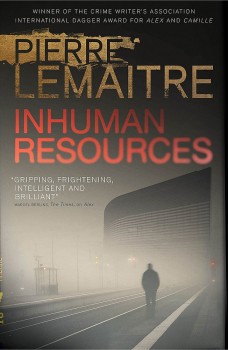 Alain Delambre, formerly a highly paid executive in human resources, has been out of regular work for four years. When a major company shows some interest in his application for a senior position he adopts desperate measures to obtain it.

The novel is in three sections – before, during and after. There is little action in the first section, considerably more in the second, whilst the third is a positive whirl of activity. That doesn't necessarily mean, of course, that the book improves as it goes along and the reader may well feel that the relatively calm first section is, in fact, the best.

Alain Delambre is a man down on his luck. Having at one time held a highly-paid executive position in the area of human resources, he lost his job and for four years has been out of work. He has managed to find a part-time job, his day beginning at 5am and lasting three hours, which involves sorting boxes of medication before distribution to pharmacies. It pays only 585 euros a week – 45 per cent of the minimum wage – and he has to supplement it with a few more hours of manual work throughout the day and late into the evening. He keeps his wife in ignorance of his situation because he loves her very much and is ashamed to let her know the truth.

One day his immediate supervisor, whom he cannot stand, kicks him when he is bending down. Furious, he turns on him and knocks him unconscious – an action that results in his immediate suspension and eventual dismissal. He also has to serve a prison sentence. It is now an even more depressing state of affairs, but it is about to get much worse. However, before it gets worse it appears to get better.

He is constantly applying for jobs but has almost grown accustomed to being disappointed. One day, however, he receives a letter from a head-hunting firm, BLC-Consulting, to say that he is being considered for an assistant HR post – something he had scarcely dared to hope for. What he is not told is the complex scheme, involving the simulation of a hostage-taking scenario, has been agreed between the CEO of a firm called Exxyal and Bertand Lacoste of the head-hunting firm.

Delambre is determined that he is going to get the job, even going so far as to employ a private detective whom he can ill afford. His plans and how they work out form the second section of the book. The plot becomes very intricate and at times hard to follow, but the last section is even more disappointing and reads more like an add-on. A car screams along the road at over 100mph but it goes on for so long that it is difficult to remember what it is that Delambre is trying to achieve. In the end he is rather a pitiable creature.