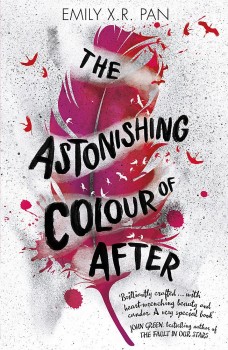 The Astonishing Colour of After

Leigh Chen Sanders is 16 when her mother commits suicide. Leigh and her father find both anti-depressants that haven’t been taken, as well as a note thrown away in the rubbish. The note exhorts Leigh to remember but doesn’t say what she must remember. When Leigh encounters a large red bird that speaks her name in her mother’s voice, she is certain that the bird is her mother.

The bird tells her that she must go to Taiwan to meet her grandparents for the first time. Leigh knows that the answers she seeks will be there, and so persuades her grieving father to take her there and let her get to know her Waipo (grandmother) and Waigong (grandfather) as well as Feng, a friend of the family.

Leigh is mixed race, her father is American and her mother was Taiwanese. In America she has had to suffer racism, both intentional and unintentional, but was cut off from her Taiwanese heritage by her mother’s refusal to talk of her home country or to let Leigh learn the language, so she is at a huge disadvantage when she is finally able to meet her maternal grandparents. Despite the language barrier, Leigh immerses herself in Taiwanese culture and does her best to connect with the red bird and get to close to what she believes is the spirit of her mother. But the clock is ticking, as in Buddhist belief, the spirit of a dead person only remains tied to the earth for 49 days before its subsequent rebirth.

Leigh’s mother’s depression and subsequent suicide is handled with penetrating insight. There is no attempt to escape the harsh and heart-breaking reality of suicide and the burden of guilt that both Leigh and her father are left to carry. Leigh articulates her emotions and view of the world as colours – colours she expresses through her art as well as through her friendship with Axel, her best friend. Axel will ask her how she’s feeling, and Leigh will respond by naming a colour, and I was quickly immersed in Leigh’s world, seeing her emotions as colours through her own eyes as Leigh narrates her own story in her own words.

The Astonishing Colour of After is a book to be read slowly, immersing yourself in Leigh’s thoughts and feelings, her hopes and her fears. Her search for her mother’s spirit takes on a desperate edge as time inexorably advances to the day when she believes her mother will be lost to her for a second time, but before that happens, Leigh needs to understand what it is she must remember. Leigh’s relationship with Axel advances through a series of memories intertwined with Leigh’s attempts to connect with her mother’s spirit. Her relationship with her father and grandparents is equally important to her understanding of the past, as is her connection to the enigmatic Feng.

Emily XR Pang has written a remarkable book, weaving magic into the story, both literally and metaphorically, and at times it is impossible to know when reality ends and magic begins, and the ability to inextricably connect the two is one of the book’s huge strengths. The other is the lyrical writing and the way the world is depicted through the eyes of someone capable of translating what she sees into her art. Leigh’s view of the world is uplifting, even when dealing with the darkness that travels hand-in-hand with a cruel and at times inescapable illness – depression. Discussion of mental illness is a taboo that needs breaking down, and The Astonishing Colour of After is a book that will help break down that barrier.