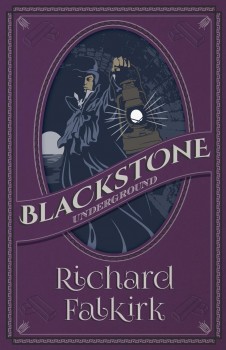 The Bank of England is being threatened with an audacious break-in. It’s Blackstone’s job to stop this happening

Bow Street Runner Edmund Blackstone is under pressure from all sides. An audacious group calling themselves the Diddiki are sending taunting letters to the newspapers proclaiming their intention to show up the flaws in the Bank of England’s security by breaking into its vaults at ‘a dark and midnight hour.’ They claim to be public-spirited individuals, not criminals, and the mood in London is on their side.

Sir Richard Birnie, the Chief Magistrate and Blackstone’s boss, wants the Diddiki caught. Birnie’s got reforming politician Robert Peel snapping at his heels with new-fangled ideas for a police force that don’t find much favour with Birnie or the Runners. Blackstone and his colleagues have got little or nothing to go on and spend a lot of time grumbling into their drinks in their favourite watering hole, the Brown Bear, and laying bets on whether it’s going to snow or not in the next few days.

To add to Blackstone’s problems, a 13-year-old thief is due to be hanged in Newgate prison and his sister fervently believes that Blackstone can save him from the noose. Blackstone is by no means as certain, but he’s determined to do what he can, as he knows how easily he could have ended up in the same position during his time growing up in the worst of London’s slums.

Of all the Blackstone books, I think this is my favourite, and not just because of the fascinating look beneath the streets of Georgian England in the late 1820s at the stinking miles of foul sewers and other tunnels that at times threatened to undermine the fabric of the city. Falkirk’s London is dark, dirty and depressing but always entertaining. His pages are peopled with men and women who all feel real and the period slang never feels forced or out of place. The books are great examples of 1970s writing and stand favourable comparison with Georgette Heyer’s earlier classics.

Falkirk shines a light on the harsh lives of London’s dollymops, as female servants are known. The age of consent for girls was as low as 12, and there was scant protection even for those below that age, especially where men of power and influence are concerned. The age of consent is higher now, but sadly, the same problems still abound, although at least condemned criminals no longer get ‘scragged’ in front of a cheering crowd, although there are doubtless plenty who’d want to bring such a spectacle back in the name of justice.

The Blackstone books always leave me thinking that in many ways, although vast strides have been made in welfare and justice reforms in the last to hundred years, there is still a deep seam of unpleasantness in many people that lies just below the surface, ever ready to burrow out, covered in slime like a tosherman from the sewers in Blackstone’s day.

But despite that, the books are also vastly entertaining, as well as informative, and none more so that this fast-paced romp overground and underground, as Blackstone pursues the man or men who are holding him up to public ridicule and undermining his hard-won authority on London’s violent streets. The supporting cast get to shine as much as ever here, with rough, tough Runner George Ruthven getting a bigger than usual role, and there’s an usual amusing cameo from the chameleon-like Lawler who’s doing his best to extricate himself from the ample bosom of a rapacious widow whilst surrounded by ships in bottles!

The denouement is up there with Falkirk’s best and is a worthy ending to an excellent story. Amidst the darkness there’s a lot of humour, and as ever, Blackstone’s essential decency shines through, although I do wonder if the girl in the Brown Bear will ever acquire a name. That’s not something I remember from my reading of the series when they were first issued in the 1970s. I think maybe the lack of her name says more about the time he operated than it does about Edmund Blackstone himself.