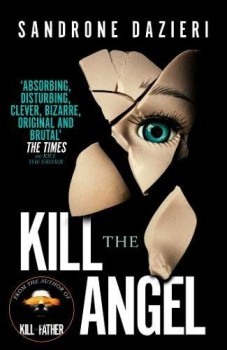 A train from Milan pulls into Rome’s Termini station. No one emerges from the Top-Class coach – they are all dead. Deputy Chief Colomba Caselli is the person who discovers them and then sets out to find the culprit

The people in the Top-Class coach of the express from Milan are killed by some sort of gas. Deputy Chief Colomba Caselli, who has only recently rejoined the force following a previous problem, is the first person to discover the bodies and has to be decontaminated. She resolves to find the killers.

In the immediate aftermath of the train event Columba oversteps the mark in a police operation to search a local mosque and gets thrown off the force. So she enlists the help of an old friend, Dante Torre, who is a very intuitive investigator but who suffers from an unfortunate psychic condition. Dante has a strange history including being kidnapped and kept prisoner when he was young and has limited memory of his actual family. He currently makes a bit of a living lecturing on conspiracy theories. Columba and Dante gradually go on to identify and chase down the person behind the train event.

This is a complex story involving numerous situations as Columba and Dante and their loyal colleagues explore different theories and different past crimes in their attempt to find the killer. The text is very readable but very dense. And the situations become more and more violent. No detail is spared of the violent acts that take place in Rome, Berlin, Innsbruck and the US in particular.

Links to Russia are also woven into the story. In fact, the story begins in a very gruesome prison in Russia in which two men and a mute girl are sharing a cell in a prison from which no one ever emerges. The Russian connection throughout the book is very convoluted and at times difficult to follow but nevertheless it is significant to the plot.

The locations of each series of events are described in some detail so that clear pictures of each event are built up with interesting detail of the layout and potential escape routes as Columba and Dante plan how to proceed with their search. Although there are a large number of other characters, it is never known exactly who any of them really are, so frequently things change and unexpected things happen. It is difficult to know who to trust.

Both Dante and Columba have great depth of character and the other characters are sympathetically developed in the scenes in which they appear. There are interesting touches, such as Dante’s love of espresso coffee, or his physical reactions when he enters a crowded space. Indeed, his feelings of panic and associated physical symptoms are clearly written from experience. As it turns out Dante’s condition isn’t the only mental illness in the story, which makes for some thought-provoking scenes toward the end.

The whole novel is set in a modern context with plenty of reference to technology such as voicemail, Snapchat and the use of emojis. The translation from the Italian by Antony Shugaar is first-class. Overall Kill the Angel is a good, if somewhat heavy, read.