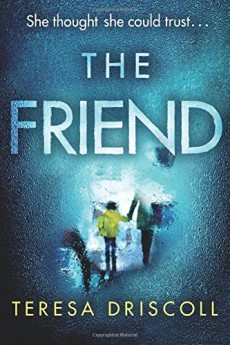 Two boys are in hospital 200 miles away and one of them is Sophie’s son. But no-one knows which child Ben is.

Now. Sophie is on a train when she receives the call that will jettison her into a torment of regret. Her son Ben and his friend have been in a tragic accident, but the nature of their injuries means the hospital staff cannot be sure which child is which.
Before. Tedbury in Devon is the right place to raise a family, even though Mark, Sophie’s husband, is still doing the commute to London. She can’t tell him she is pining for the city – she’s miserable, and still recovering from the shockwaves of post-natal depression. But Emma buys a house in the village, and suddenly life looks less bleak, less humdrum. Emma is not quite like anyone else Sophie knows. She is forthright, charismatic and just a little out there. Even though opinions in the village are divided, Sophie is soon close to the newcomer.
The story hops between the present and past, written in Sophie’s first-person point of view, with a scattering of chapters in the third person point of view, following Emma. It hits the ground running, throwing questions, tension and suspense at the reader. Any parent would understand and feel emotionally invested in a story that starts with a mother unable to be by her injured little boy’s side. The first pages drew me in, hooking me with its ghastly image. Unfortunately, a couple of chapters in the pacing drops off, and this inconsistency does reappear at times.
Sophie is, at first, intriguingly flawed; a young mother who realises she has been selfish in demanding that she and her husband leave London. But after a while, she falls into the somewhat overdone needy post-natal-depression character. It is a shame, because this is a real condition with devastating consequences, but the main character doesn’t feel sufficiently developed to raise sympathy. In the last few pages, I rolled my eyes more than once, but right at the end, she redeems herself, showing growth and development. She becomes ballsy.
I found Emma, though not a character who flew off the page either, significantly more interesting in a dark, nasty way. Little by little the reader learns what she is up to, and although her raison d’être is not particularly dramatic, her bad behaviour is appetising. I found Ben’s actions at the end out of synch with his documented problems. The other reasonably large cast of characters, apart from Emma’s son who is portrayed convincingly, are rather too pleasant and flat.
The Friend is a satisfying read. There is a sprinkling of detail about the various milieus, which grounds the story. The dialogue is not highly character-distinct but believable, and there is a balance of introspection, conversation and action. There are several conveniences and moments where the suspension of disbelief struggles to hold its head above water. But overall, it held my attention and is a fun, snuggled-up-on-the-sofa book.