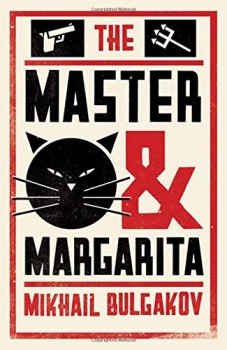 The Master and Margarita

A mysterious Professor of Black Magic arrives with his bizarre entourage in Moscow to wreak havoc among the city’s intellectual elite and ordinary citizens. He soon becomes interested in the fate of the Master and his manuscript about Pontius Pilate.

It’s 1930s or thereabouts. One day a mysterious gentleman, possibly a foreigner, although speaking perfectly polished Russian, arrives in Moscow. The self-proclaimed Professor of Black Magic called Woland is accompanied by an entourage of bizarre-looking and behaving servants: a strangely dressed ex-choirmaster, a fanged hitman, a naked witch and a huge black talking cat.
Initially Woland approaches two men sitting on a park bench: writer Berlioz and poet Bezdomny. He informs Berlioz of his imminent death and soon enough the man has a very unfortunate tram accident and loses his head in the process. Literally.
Woland moves into the deceased’s apartment and immediately begins to conquer the world of the Russian intelligentsia, charming and teasing his way into performing a magic show at one of the most respectable theatres. The spectacular performance leaves the city in chaos as roubles turn into forbidden dollars, or even worse, into cut-up paper, and the female population ashamed of own greed. Big and small politicians have no idea who to blame.
Meanwhile the shocked poet ends up in a lunatic asylum where he meets the Master who turned his back on real life and his lover Margarita and took refuge there after a traumatic experience. The Master wrote a manuscript about Pontius Pilate, the fifth prefect of the Roman province of Judaea, best known for adjudicating on the trial and crucifixion of Jesus. Encouraged by Margarita, the author approached publishers, yet his work, offering a different depiction of the events than in Bible, has been criticised, plagiarised and shamed but not published.
It becomes clear that the enigmatic visitor is in fact the Devil himself, coming to wreak havoc among the capital’s cultural elite, as well as the ordinary mortals and the citizens fed the atheist diet of national propaganda. He uses his extraordinary powers to question the lack of belief in the miracles of various kinds, especially those of a religious or unexplained nature. No wonder then that the Devil’s mission become entangled with the fate of the Master.
Mikhail Bulgakov (1891-1940) trained as a doctor and volunteered for the Red Cross on the outbreak of the First World War. He later enlisted as a doctor for the anti-Bolshevik White Army, before eventually giving up medicine to concentrate on literature. The Master and Margarita, a newly revised and updated edition in Hugh Aplin’s translation, is a Russian classic. This particular edition contains a comprehensive biography of the author, various notes and quotes referred to in the main text, and an appendix with extracts from Bulgakov’s letters, which together aid the understanding of pre-WWII Russia.
The novel caused so much stir at the time of writing that it wasn’t published until long after its author’s death, and only in censored version in the 1960s. Since its first venture into the literary world it has been hailed as a masterpiece due to the richness of themes, stunning language, multiplicity of allegories and metaphors.
The multi-layered narrative switches between Jerusalem in the time of Christ and Bulgakov’s contemporary Moscow, the city that doesn’t believe in God or Satan. The atmosphere of an oppressive regime and veiled references to Stalin are constantly present. Reaction to the fictional Master’s story of Pontius Pilate echoes Bulgakov’s own experiences plagued by Soviet censorship which had banned his works, although apparently the dictator himself was not anti-Bulgakov.
The Master and Margarita allows for many interpretations evolving with times and with readers’ reactions. Most of all it’s a fascinating read, full of tension and drama, dry humour, questionable jokes and a colourful riot of ridiculous surrealism. It is a satirical, sad and truthful portrayal of the society and political era lacking the freedom of expression which could easily fit into 2018.
There’s a police investigation into the Woland-inspired situation in the capital after the inexplicable events when people claimed they were hypnotised into doing the weirdest actions. Also, there’s a powerful and poignant love story between a disillusioned writer and his enthusiastic supportive lover, ready to sell her soul to Satan and to become a witch just to help him with the creative process. It’s a brave analysis of the nature of good and evil, innocence and guilt, as well as interpretations of people’s motives and their desires to better themselves at whatever cost.