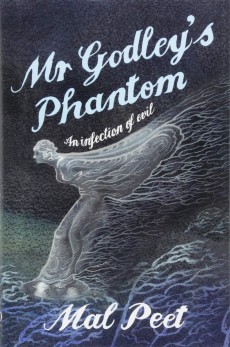 Martin Heath is struggling to settle after the horrors of World War Two. When an old comrade tells of a position with elderly Harold Godley in a lonely part of Devon, he is plunged into a dark mystery.

Mal Peet, also known as a children’s author, died in 2016. Although he finished this haunting and – in the light of recent events – still very relevant story, he did not have time to revise or edit the manuscript. The publisher has paid Peet the tribute of releasing the book exactly as he wrote it, including the author’s notes from the typescript which have been incorporated into the book as the ‘naming of the parts.’

Martin Heath, a much-decorated former infantry corporal, struggles to overcome his wartime experiences, from the brutal close quarter fighting on the Italian peninsula to the ultimate horror of the liberation of the Bergen-Belsen concentration camp. In modern terms he is suffering from a bad case of post-traumatic stress disorder. He is drinking heavily, short-tempered and prone to violence, baffled by his widowed mother’s hopes to get on with her own life, and totally unable to settle again at the university he left for the battlefield.

When his former officer writes to him suggesting he consider a job with a wealthy elderly recluse in a near-deserted part of Devon, he jumps at he chance to nurse his mental wounds – he still assesses all countryside in terms of ambush sites and buildings for their defensive capabilities – in near solitude.

He joins Harold Godley’s small staff as a general handyman-chauffeur and is delighted to discover his duties involve the maintenance and handling of a magnificent Rolls Royce Phantom III HJ Mulliner Sedanca de Ville, one of the most iconic vehicles ever built and a masterpiece of British automotive engineering.

The other members of the staff are a cook, an ancient gardener, and the enigmatic live-in maid Annie. But it is Godley himself who fascinates and equally horrifies Heath. A desiccated near-invalid, the widowed Godley has been deeply affected by the death of his shell-shocked only son in the final days of the First War and the subsequent suicide of his wife. He feels his parental and marital neglect contributed to their deaths, and suffers from depression and nightmares.

Godley views Heath as what his son might have become and eventually makes him a strange proposition. Soon after, his neatly folded clothes are found on a nearby beach. A lengthy police investigation can find no criminal reason for his disappearance.

To say more would be to spoil what is a truly haunting novella, sharply observed, wonderfully written, reeking of cigarettes and petrol, and with some of the sharpest descriptions of time and place you will read this year.

Peet’s one paragraph describing the terrible winter of 1947 captures the awful conditions perfectly. His brilliant portrayal of PTSD and its effects is as good as any ever written. And the overall, eerie feeling of a growing sense of evil that dominates the whole story makes this a little masterpiece, much like the car of its title.