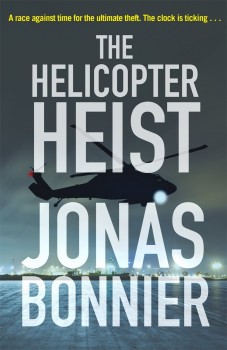 A gang sets out to commit Sweden’s biggest ever cash robbery.

When the part-owner and president of your parent company writes a novel, it’s probably sensible to publish. But Zaffre need have no qualms about this brilliant ‘factional’ interpretation of a multi-million robbery that will grip both true crime fans and readers of good fiction anywhere.

Jonas Bonnier was the former CEO of Bonnier Books, a family-owned company headquartered in Sweden, a top-15 publisher with global sales of £728 million. And he has not strayed too far from home for this clever reconstruction of one of the most daring and clever robberies anywhere in the world – one more spectacular than even Hollywood could imagine.

The facts are simple. On September 23 2009 the G4S cash service depot in Västberga, southern Stockholm, was robbed by raiders using a stolen Jet Ranger helicopter to land on the roof. The exact amount stolen – believed to be several hundred million kroner – has never been revealed and despite a seven million kroner reward (around £600,000) the cash was never recovered.

Police were unable to use their own helicopters since decoy bombs had been placed near them and responding officers on the ground were delayed by spiked chains, then ordered not to take on the robbers who appeared to be armed with automatic weapons. In liberal Sweden, two Air Force fighters on a drill over the Baltic had an offer of help to force down the robbers’ chopper rejected because it was purely a civilian matter!

The most amazing thing about the whole affair was that the police knew it would happen! A month earlier the Swedish Embassy in Serbia was given “certain information” about a criminal group preparing a robbery.

Serbian Interior Minister Ivica Dačić later claimed former members of the BIA Red Berets, the infamous elite special forces police unit including former members of Arkan’s murderous ‘Tigers’, were involved and there was certainly some Serbian/Montenegran interest. Swedish police later arrested and charged seven men who were all sentenced to prison terms of up to seven years. Three were cleared of all charges and police suspect another ten unknown crooks may have been involved.

Given this spectacular background – and extensive interviews with the four principal protagonists – there is no reason why Bonnier’s book should not be totally believable. It is that and more. All four are professional criminals. When what looks like a watertight plan to steal millions from the largest cash facility in Sweden almost falls into their laps, everything seems perfect.

The scheme seems foolproof, with every contingency covered, and every detail planned perfectly. But can they ever really hope to pull off such an extraordinary crime? Each has a specific role to play utilising their own unique skills to the extent that the police find themselves totally baffled as the robbers consider every possible scenario and set up a contingency plan.

The story follows each of them from the start. They had all sworn off doing another ‘job’, but the rewards are far too big to be ignored. All four are portrayed with such humanity and empathy that the reader feels a real link to them All appear as little more than regular guys – and the former boxer Sami, the father of two young children who he adores and for whom family plays a huge part, is a particularly sympathetic character.

Writing a thriller based on a true story is always particularly tough. Instilling enough drama while staying true to the original is a thin line, which Bonnier negotiates with skill and elan. It’s difficult to know what parts are fact and which are fiction, and many readers will find themselves so dragged in by his characterisation that they will find themselves hoping the robbery succeeds.

As a reminder that life can sometimes be every bit as engaging as art, the tension building up to the attempt and the robbery itself is nail-biting in its suspense. Full of drama, tension and with a really compelling plot, The Helicopter Heist is a truly riveting read that will go down well with non-fiction and fiction readers alike – and the fabulous twist at the end is not only unsuspected but also fits perfectly into the plot.