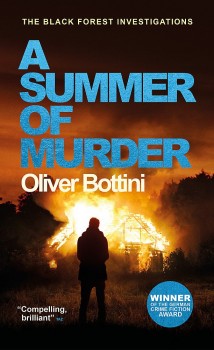 A Summer of Murder

Chief Inspector Louise Boni of the Freiburg Kripo is back on duty and immediately pitched into a major case involving the movement of weapons across Europe.

This is the second of the Black Forest Investigations, featuring the brilliant but unpredictable Louise Boni. The strains imposed in her last outing – Zen and the Art of Murder – proved to be very testing, and Boni has spent six months on leave in a Buddhist retreat fighting alcoholism. She is still fragile and spends much of the book replaying episodes from the past in which close colleagues died.

A new major case emerges from a seemingly minor event, a fire in a rural shed. Unexpectedly, the shed has a basement filled with guns and also explosive, and when it detonates a fireman is killed. Ownership of the munitions is unclear, but whether down to a neo-Nazi group or a terrorist cell there is enough concern about the matter to alert a number of national authorities.

One of these is a somewhat shadowy offshoot of the Foreign Intelligence Service, which shuns the formal and rather uncomfortable liaison established between other crime-fighting agencies. The leader, Marcel, seems happier to proceed by way of informal contact with Boni rather than with her superiors, possibly because it is Boni who pushes to gather evidence for the case and is at the forefront of new developments.

The process is very fraught, however, as more deaths accumulate. Under a very testing midsummer heat the various Kripo teams snap at each other, while the boss Almenobroich seems exhausted and unable to cope. A link is made to the Balkan wars of the 1990s, and there is harrowing testimony of the barbarities imposed by various religious groups, and the difficulty of the Muslims in particular in securing the arms to protect themselves, since the international community conspicuously failed to make this unnecessary.

One aspect of the book that struck me very forcibly was the contrast between the formality of the officials, and Boni’s rather wild behaviour and disregard of orders. At the fire at the beginning of the book, the Chief very properly takes formal control of the exercise and gives orders to ensure each phase of the operation is conducted in a very correct manner, for example. In contrast, Boni’s behaviour seems frequently out of control to an extent which is sometimes difficult to credit.

The explanation for Boni’s continued acceptance within an authoritarian structure seems to lie with the general recognition that her intuition and work ethic makes her worth the effort. She has a pretty senior rank for someone who works with a team (in an off-and-on sort of way) but has no subordinates, which again seems a little puzzling. It does call for some suspension of disbelief to imagine the character depicted managing to find a place in an organisation like Kripo, but I suppose it is her very incompatibility which makes her such an interesting protagonist.