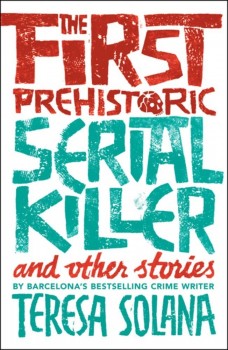 The First Prehistoric Serial Killer and other stories

A collection of short stories set in or around Barcelona featuring a variety of characters, apparently respectable, who become involved in serious crime.

This collection includes a total of 13 stories, each centred on a single character, some told in the first person, some in the third. The voices are quite distinct and explain the perspective of each protagonist in a straightforward way, although all have an off-beat flavour which is frequently macabre as well as humorous.

The first five stories, under the collective heading of Blood, Guts and Love, feature a wide set of characters. We begin with a surprisingly sophisticated cave dweller charged with a murder investigation (The First Prehistoric Serial Killer), followed by a woman’s bold approach to help a daughter in trouble (The Son-in-Law) and then a curator challenged with an superfluous exhibit (Still Life No. 41). Ghostly concerns about class (Happy Families) and interspecies misunderstandings (I’m a Vampire) round off the first part.

The second (Connections) comprises eight stories, all modern and contemporaneous. While each is told from a different perspective, many of the stories turn out to share characters and incidents. A disinterested teenage witness to a murder (Flesh-Coloured People) is succeeded by a couple both keen to end their marriage (The Second Mrs Appleton) and by a nephew of a mafia boss assigned to develop his internet skills for dubious purposes (Paradise Gained).

Then follow stories of a builder who unexpectedly finds a corpse (Mansion with Sea Views), a woman finding ways to limit her exposure to opera (I Detest Mozart) and women sharing a jail cell who come under attack (Birds of a Feather). A translator abandoning her rural idyll for life in the city (Barcelona, Mon Amour) and a woman letting her flat to some surprising tenants (But There Was Another Solution) round off the collection.

Originally written in Catalan, these tales suffer in no way from translation and emerge sharp and clear. While many of the stories involve death, the event is underplayed and set in a domestic context, making it at the same time both familiar and bizarre. The everyday lives of the protagonists come across very clearly, personal preoccupations interwoven with a social and political commentary which gives a distinctly local flavour.