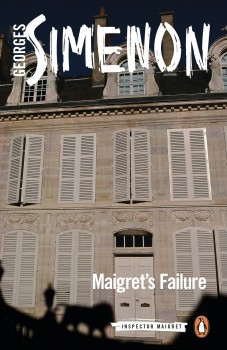 Maigret is visited by a village school acquaintance he had never liked. He tells the detective that he has been receiving letters threatening to kill him and, reluctant as Maigret is to get involved with the man, he decides to make enquiries.

A Simenon story with the title Maigret's Failure is something of a novelty because Maigret never fails in his search for the truth. In fact, he doesn't fail in this novel either unless a tendency to prejudge a situation can be regarded as failure.

In a way, of course, for Maigret that is a failure because his cases are invariably characterised by fairness, justice and a desire to discover the truth. The reason for his departure from these principles on this occasion goes back many years – to his childhood, in fact, when he was a pupil at the village school in Saint-Fiacre and his father was estate manager at the château there.

Also attending the school was a boy by the name of Ferdinand Fumal, whose father, a butcher, was making a name for himself by buying up land on which to graze his own cattle – a practice of which Maigret's father disapproved. As a result Fumal tried to make trouble for him with the Count of Saint-Fiacre and, although he didn't succeed, relations between the two families were broken off.

Ferdinand Fumal – now a very wealthy man – turns up at the Quai des Orfevres, having been recommended to Maigret by the Minister of the Interior. Maigret is not in the least impressed by this approach, though he is aware that there is potential for political trouble.

Fumal claims to have been receiving death threats in the mail and produces the letters as proof. Maigret agrees, though not very graciously, to make enquiries. He acknowledges to himself that, never having liked the boy, he is now at least slightly prejudiced against the man. This seems justified when the first person he interviews – Fumal's secretary – tells him that her boss wrote the letters himself.

There is one further difference in this novel from the majority of Maigret tales. Normally, although the action tends to remain in Paris, we find the detective moving from one place to another, either in a police car or by cab. There is very little of this in Maigret's Failure. The crime takes place in a very large house – one which could almost be described as a mansion. It is so large that the reader may have difficulty in imagining it – something that is a considerable disadvantage when it comes to following the detailed plot.

It is clear to Maigret, right from the start, that the motive for the murder lies within the house itself and all his investigations are associated with it. The murdered man had been unpopular with all his acquaintances, with the result that everybody in the house is a suspect, including a secretary who has an office there in addition to one in the actual workplace.

The investigation is detailed, at times repetitive, as we are taken up and downstairs, from room to room. What seems difficult to establish is how anybody could have a motive for murder – something that remains true even when the facts are established. This is something very unusual in a Maigret novel and makes for an unsatisfactory ending.