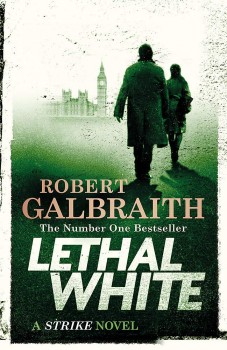 Private investigator Cormoran Strike and his partner Robin Ellacott have another mystery to solve, digging into a blackmail attempt on a Tory MP, as well as looking into the disturbing possibility that a distressed client really did witness the murder of a child many years ago.

London private investigator Cormoran Strike is back in another convoluted but wholly entertaining mystery from the pen of Robert Galbraith, probably better known as JK Rowling.

Lethal White starts where the previous book, Career of Evil, left off, with the marriage of Strike’s former assistant – now his work partner – Robin Ellacott to the slimy and unsupportive Matthew who always seems to have done his best to undermine Robin’s confidence whilst purporting to act in her best interests.

But by deleting some of Strike’s texts from her phone without her seeing them, he’s crossed a line in their relationship, and Robin is close to walking out on the marriage before it’s really begun. And if she did, I’d be behind her all the way. In my view Matthew has few, if any, redeeming features, and Yorkshire-born, brave, straight-talking Robin deserves better. Much better!

There’s bags of unresolved tension between Strike and Robin, and at times Lethal White seemed to be wandering off into romance territory, which usually never ends well in crime books. But I’m thoroughly invested in the pair of them, so was quite happy to cut Rowling plenty of slack in that area, as the book has bags of intrigue and mystery as well.

Fast forward a year. London is in the grip of Olympic fever with the games about to start. Robin is still with Matthew. She’s also still struggling to deal with the aftermath of the knife attack she was subjected to during the agency’s last major case. The physical scars are still with her, but in many ways the mental scars are more pronounced. Robin, usually calm and resourceful, is now suffering from panic attacks, but is determined to keep her problems to herself. Strike is trying to cope with the extra demands on the agency’s resources after his fame went viral in the media off the back of his last case. He’s had to employ more staff to help cover their numerous cases but doing a desk job isn’t what he wants out of life.

When Billy, obviously very disturbed and probably under the influence of drugs, turns up in Strike’s office asking for help, Strike’s interest is piqued. Billy claims to have witnessed the murder of a child years ago. It’s hard to gauge whether there is any truth in the story, but something about the man’s agitation unsettles Strike, and he decides to dig deeper. His investigations lead him in the direction of Jimmy Knight, Billy’s brother, a man who’s heavily involved with both left-wing activist group Workers’ Alliance and CORE, an acronym for Community Olympic Resistance, a social justice group concerned with the damage being done by the Olympic programme to both environmental interests and communities.

By coincidence, Minister for Culture, Tory MP Jasper Chiswell – pronounced Chizzle–  also has an interest in Jimmy Knight, and wants any information Strike can get on him, but Chiswell isn’t forthcoming about why he wants Knight investigated. All Chiswell will say is that he’s being blackmailed, he won’t say what over, but he’s prepared to pay well.

Robin goes undercover in Westminster to get close to Geraint Winn, an MP who’s married to Della Winn, the Minster for Sport, a woman who hasn’t let her blindness prevent her scaling the dizzy heights of some very greasy poles in the Tory party. Winn is in league with Knight, but he doesn’t want money – he wants Chiswell out of office.

Rowling weaves her usual magic with a long, infinitely complicated story about shifty politics in the corridors of power and dodgy dealings in an aristocratic family. She hits the spot effortlessly with the mannerisms and styles of a particular brand of Tory politician, and also shifts with ease to people like Billy and Jimmy Knight at the opposite end of the social and political spectrum. Her large cast of characters is handled with characteristic ease, although I think there were a few missteps with her attempts to render accents in speech, which isn’t something that usually comes over well, although here it wasn’t much more than a slightly irritating distraction.

The plot is complex and in size the book follows the same pattern seen in the Harry Potter series, with each one gradually increasing in size until house-brick proportions are reached. There was probably a tad too much UST between Strike and Robin, but that didn’t detract from a generally impressive piece of storytelling, which is what Rowling excels at. I also learnt some interesting facts about horses! There are clues littered around for the eagle-eyed reader to pick up, but I must admit I rarely come into that category and I was in the dark most of the time, although that simply didn’t matter, as I’d settled down for the long haul, and my attention never wavered.

And, for the record, even though he’s not as big or as hairy as Strike is described, I’m very much a fan of Tom Burke in the title role in the BBC’s dramatisation.