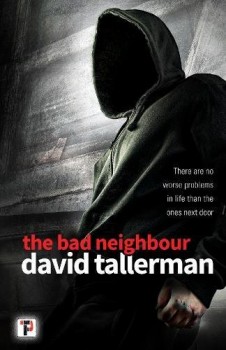 It doesn’t take Ollie Clay long to realise he’s made a mistake buying a rundown house in a squalid district of Leeds. But he’s made his bed, and now he has to lie on it.

When Ollie Clay comes into an unexpected inheritance, he decides the best thing he can do is put the money into property, buying himself a house. The money burns a hole in his pocket and he’s soon the not-so-proud possessor of a dilapidated house in a rundown neighbourhood on the outskirts of Leeds. The walls separating him and the house next door are paper-thin and the plaster is held together by little more than some peeling wallpaper.

Ollie can hear every word of his new neighbour’s violent outbursts and soon realises he’s living next door to an anti-social thug with links to extremist hate groups. Just walking down the road with his girlfriend Yasmina attracts the wrong sort of attention, as does going into the local pub with a black friend. Chas and his racist friends make Ollie’s life a misery and he feels powerless in the face of their sustained unpleasantness. But Ollie has a stubborn streak a mile wide, and he decides to carry the war into the enemy camp.

David Tallerman presents a bleakly accurate view of the social decline that accompanies bad housing and neighbourhood deprivation where boarded-up houses are used as drug dens and squats, and living in squalor is seen as entirely normal. As a former property lawyer I winced at the series of bad decisions that landed Ollie with the property – and the neighbour – from hell, and I could easily imagine the result of the survey he didn’t bother to commission. But all lawyers know there are times when you can’t save a client from themselves, and Ollie Clay would have been one of those clients.

I didn’t find Ollie a particularly sympathetic character, and there were plenty of occasions when I just wanted to leave him to stew in a mess of his own making, but there was something darkly compelling about The Bad Neighbour that kept me reading. Ollie soon finds himself caught up in a fight that he doesn’t seem to have any way of winning, and it was that sense of striving against the odds that made Ollie understandable – if not terribly likeable.

As strange as it might sound, there were times when I actually felt more sympathy for Chas, who was very much the product of his environment, even though his views and actions were utterly contemptible, than I did for Ollie, who often came over as his own worst enemy, even when there was some hotly fought competition for that position.

There were several times that I couldn’t see how Tallerman was going to extricate his protagonist from the situation he’d ended up in, and as the book rapidly gathered pace, I found myself turning the pages quicker and quicker, intrigued by this grim tale of bad choices. The Bad Neighbour was all too real and all too depressing and certainly deserves the appellation northern noir. It is also a well-written and cleverly imagined crime thriller with a knife-sharp edge.