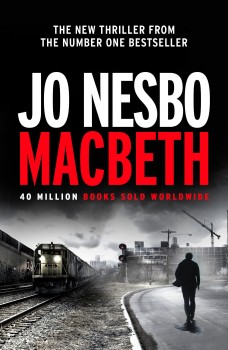 Inspector Macbeth is the best cop, able to clean up any mess, such as a drug bust turned into a bloodbath. He’s also an ex-drug addict with a troubled past.

If you are familiar with Shakespeare’s Macbeth you will know what to expect. If not – brace yourself for the modern retelling of the condemned life. The ongoing Hogarth project proposes to bring all of Bard’s plays as novels for 21st century readers and here we have all the vital elements: cruelty, manipulation and power games, plus darkness of soul and of setting. And above all the political ambition that goes overboard.
Just like in the original, the story is set somewhere in Scotland. The exact location is vaguer. In the country’s most corrupt, lawless and nameless town the geographical and social divisions mean both poor and rich struggle. The long-term legacy of Kenneth, the previous chief police commissioner who destroyed democracy after running the place with absolute power, left a bleak, almost medieval feel. After his death the virtuous and honourable Duncan is appointed. This offers the hope of better living conditions, new jobs, security, and the end of competition between the local drug lords and the bikers called Norse Riders, led by shrewd Sweno, and the untouchable old man Hecate, also known as the Invisible Hand, his speciality being ‘brew’, which has the same effect as crack cocaine.
Enter 33-year old Macbeth in charge of a paramilitary SWAT unit whom the idealistic Duncan promotes to the position of the head of Organised Crime. In childhood, Macbeth was for years sexually abused in the orphanage, then addicted to speed. He was crazy, hopelessly lost and lonely until a police officer, Banquo, saved him from life on the street and became his substitute father. Now he’s happy to serve the town and he’s in a relationship with the much older, beautiful but manipulative Lady. He still believes in love and the goodness of people, occasionally swaying into ‘sometimes cruelty is on the side of the good.’
The classic villainess Lady, the daughter of an unemployed alcoholic father and a depressive and violent mother, was raped when she was 13, abandoned and without a roof over her head and sacrificed her new-born baby to survive. Ruthless and ambitious, she eventually became the owner of the Inverness Casino, and with new opportunities for Macbeth, she demands that he kills Duncan and takes his place. Although initially reluctant, Macbeth does as he’s told, convinced initially he’s following fate’s call, but in a twisted reality he’s also being used by Hecate and the three sisters.
As the events turn more gruesome and Macbeth rules over the town with Lady by his side, his affection for stimulants and then addiction to much more potent ‘power’, the improved drug supplied by Hecate, makes him paranoid. The tragedy keeps unfolding as per the prophecy with no one being safe and with more corruption and violence. Friendships are forgotten, and everyone is truly doomed. Macbeth as the chief commissioner isn’t the hoped-for saviour and in fact the police turn out to be another armed gang.
Jo Nesbø’s take on Shakespeare’s play brings a new level of despair and desolation. The creator of Harry Hole knows the classic tragedy inside out, utilising many of the original names and retaining some of the hierarchy of the characters, as well as adding a different dimension, suitable to contemporary times.
It’s possible to work out that his Macbeth is set in the 1970s. The Scottishness of the atmosphere is still there, though it could easily be any drug-ridden and corrupt northern town. This is a tragedy of moral order on a grand scale, and the tragedy of individuals who have mostly been deeply damaged in childhood and through life.
The translation by Don Bartlett is excellent, especially when Nesbø introduces old-style musings, dripping with blood and menace, and some poetry. But there is also one sentence that made me laugh as it seemed very Elizabethan and infused with some humour. If you find it, you’ll be able to step back and not be distressed by the bleakness and madness of it all.