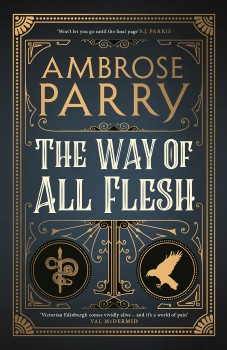 The Way of All Flesh

Young women are dying in agony and Edinburgh medical student Will Raven, personally connected to one such death, sets out to discover why, aided by an intelligent and ambitious housemaid Sarah Fisher.

This remarkable debut is the result of a literary marriage between top Tartan Noir writer and former president of the Scottish Humanist Society Chris Brookmyre and his wife, the consultant anaesthetist Dr Marisa Haetzman. It had its genesis in Haetzman’s research for a Masters degree in the history of medicine which focussed on the development of the use of anaesthetics in the Edinburgh Royal Maternity Hospital in the late 1840s.

At that time, Edinburgh – the city of Burke and Hare – was the centre of the medical world. It was also a city of contrasts with the crime and poverty of the Old Town contrasting sharply with the grand Victorian households of the New. Among its greatest medical practitioners was Doctor James Young Simpson, professor of midwifery, who not only successfully introduced anaesthetics into the then frequently hazardous business of childbirth, but also opened his home in a series of clinics which along with the city’s wealthy women, also treated its poorest.

It is against this setting – and the revolutionary discovery of chloroform – that the authors set a dark and stylish mystery underpinned by fact and research which looks at both sides of the medical world, the humanitarian and altruistic and the seamier dealings with prostitutes and abortionists.

In the Old Town several young women have been found dead, all apparently in agony. Across the city, medical student Will Raven, who has his own secret past, is about to start an apprenticeship with the brilliant and renowned Dr Simpson. Raven meets housemaid Sarah Fisher, who takes an immediate dislike to the surly and secretive student. Sarah, an inquiring and intelligent young woman who helps in Simpson’s surgeries, resents the fact that she has, and cannot ever get, any of his privileges, particularly his medical education.

Each has their own motives to look deeper into the suspicious deaths and find themselves drawn into Edinburgh’s underworld, where they must overcome their differences if they are to make it out alive.

Compelling, menacing, ingeniously plotted and surprisingly witty, this atmospheric story of murder amid medical experiments brings Old Edinburgh vividly and thrillingly to life. It also points out the restricted lives and possibilities of women on the time and the ways in which they were marginalised in a culture of paternal supremacy.

This clever tale is full of believable characters and startling incidents and offers the reader everything they could want in a historical crime fiction story – a believable fact-based plot based on superb research with plenty of extra thrills and chills.

This is planned to be the first of a series featuring Will and Sarah. If the follow-ups are as good as this, they’ll be well worth waiting for.