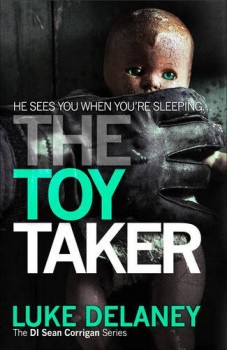 Someone is taking children from the safety of their houses in the middle of the night, getting in through locked doors while their parents are sleeping. It’s DI Sean Corrigan’s job to find them.

DI Sean Corrigan is back for a third book in a series that is developing very nicely indeed. His creator, author Luke Delaney, is an ex-copper, and it shows. The books have an air of understated authenticity that shines through in his description of pressured police officers trying to do their best against a backdrop of interfering bosses, unwelcome office moves and the constant pressure to deliver a quick result before the media frenzy around any high profile cases reaches critical mass.

This time Corrigan is up to his neck in possibly his most chilling case yet. Someone is breaking into houses in the middle of the night, getting in through locked doors, and stealing children almost from under the noses of their parents while they’re sleeping. The children appear to have gone without a struggle, making no noise and vanishing without trace. The parents have all recently moved to the neighbourhood and hadn’t yet had a chance to reactivate the alarm systems. But how does the child thief know all that when there’s no apparent connection between the families?

Corrigan is known for his ability to crack the most difficult of cases using a combination of gut feeling and the ability to get inside the mind of the people he’s hunting. For that reason, Assistant Commission Addis, a career officer who hasn’t got his hands dirty on a job since Pontius was a pilot, wants him moved from the backwater of Peckham Police Station to New Scotland Yard itself, to head up a specialist team to investigate unusual cases throughout the Met area. In other words, Addis wants someone in the limelight to take the fall if things go wrong, and he wants Corrigan to be that man.

Corrigan’s team aren’t pleased by the move, and neither is his wife. Pressure mounts when he isn’t able to deliver the hoped-for quick result in the case of four-year-old George Bridgeman, snatched from the family home. Corrigan’s sidekick Dave Donnelly, a dinosaur of the old school, is certain that George has been killed and his body hidden by the most obvious suspects, his parents. But Corrigan isn’t so sure.

With all the background hassle of the move, and pressure from his wife to make a fresh start on the other side of the world, Corrigan’s head is too cluttered for him to make any sense of the abduction, and when more children go missing, things only get worse. His ability to read a scene and visualise events from inside the mind of the perpetrator has deserted him and he’s left floundering. In many ways, removing this element of deus ex machina makes it easier to get into Corrigan’s own head, as his fears come more to the forefront. He’s a man scarred by his own past – practically obligatory in crime fiction – but that’s what makes him so good at what he does.

The basic premise of the book – someone who can access the place where children should be at their most safe – is possibly even more creepy than the backdrop of Delaney’s previous books, Cold Killing and The Keeper, and they certainly brought more than their fair share of cold shivers. As the book gathered pace I kept turning the pages faster and faster, willing Corrigan to work his magic, and almost screaming at the pages when he couldn’t.

Delaney has definitely hit his stride in The Toy Taker. The hark backs to earlier books were far sparser and I never got the feeling here that there was any element of cheating in how Corrigan reaches his conclusions. The supporting cast are great, and even Donnelly comes over in a sympathetic light, as a family man struggling with the knowledge that this could have happened to his own children.

If you haven’t made Sean Corrigan’s acquaintance yet, don’t worry. This is as good a place to start as any. Jump in, make yourself at home, but remember to turn the heating up, as this is chilling crime at its best.